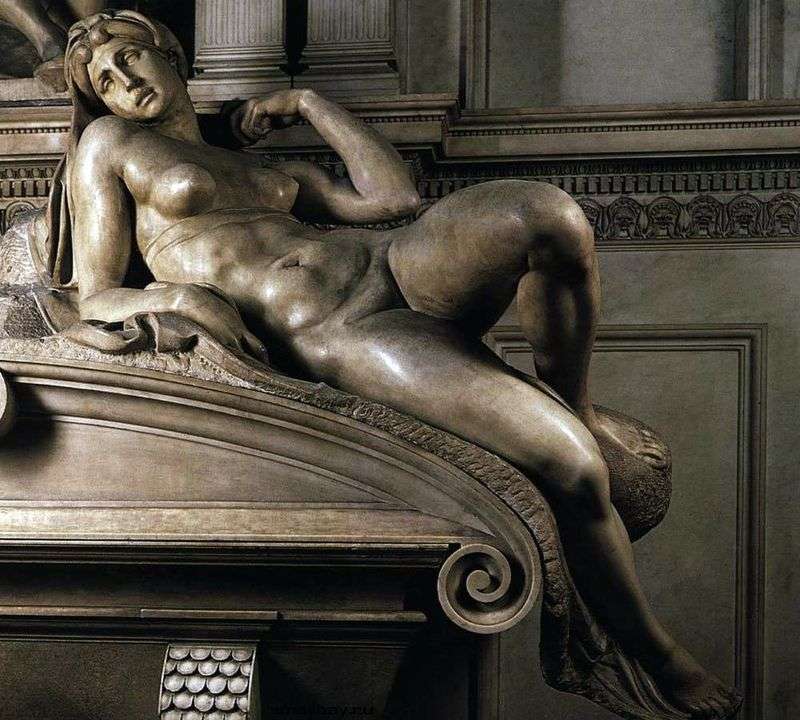 The sculpture Michelangelo Buonarroti “Morning” also has other names “Morning Dawn” and “Aurora”. The height of the sculpture is 203 cm, marble. The Florentine Medici Chapel was the work that completed the High Renaissance phase in the work of Michelangelo Buonarroti and at the same time marked the beginning of a new artistic stage. Work on it, stretching almost fifteen years, was for a long time interrupted by important events in the history of Italy.

The defeat of Rome in 1527 meant not only the end of Italian independence, but also the onset of the crisis of the Renaissance culture. Florence, who responded to the defeat of Rome by the second expulsion of the Medici and the establishment of the republic, was besieged by the troops of the emperor and the pope. It was during the greatest danger, during the eleven-month siege, that Michelangelo discovered his loyalty to republican convictions.

Appointed by the Military Council of the Republic to the responsible post of the head of the fortification work, he largely contributed to the defense of the city. After the fall of Florence and the restoration of the Medici domination, a mortal threat hung over him. Michelangelo was saved only by the fact that the pope’s vanity won his vengefulness: Clement VII Medici wanted to immortalize his kind in the works of the great master. The mood of Michelangelo, who was forced to continue the interrupted work on the Medici tomb in the conditions of the complete enslavement of Florence and the regime of the most severe terror, could not but affect the nature of the plan and figurative solution of this complex.

The shrine of the Medici is a chapel attached to the church of San Lorenzo, built and decorated entirely according to the design of Michelangelo. It represents a small, but very high room, covered by a dome; white walls are dissected by pilasters of dark gray marble. In the chapel there are two tombs – the dukes Giuliano Nemursky and Lorenzo Urbinsky; they are placed against each other, against opposite walls. The third wall – against the altar – is occupied by the statue of the Madonna, on either side of it are the statues of Saints Cosmas and Damian, made by the disciples of Michelangelo.

Michelangelo’s project was not fully implemented; he also prepared some other sculptures for the choir, which apparently included the so-called Apollo and Crouching Boy. The statues of Michelangelo – “Morning”, “Evening”, “Day” and “Night”, placed on the sarcophagi of Giuliano and Lorenzo Medici, embody the symbols of rapid time.