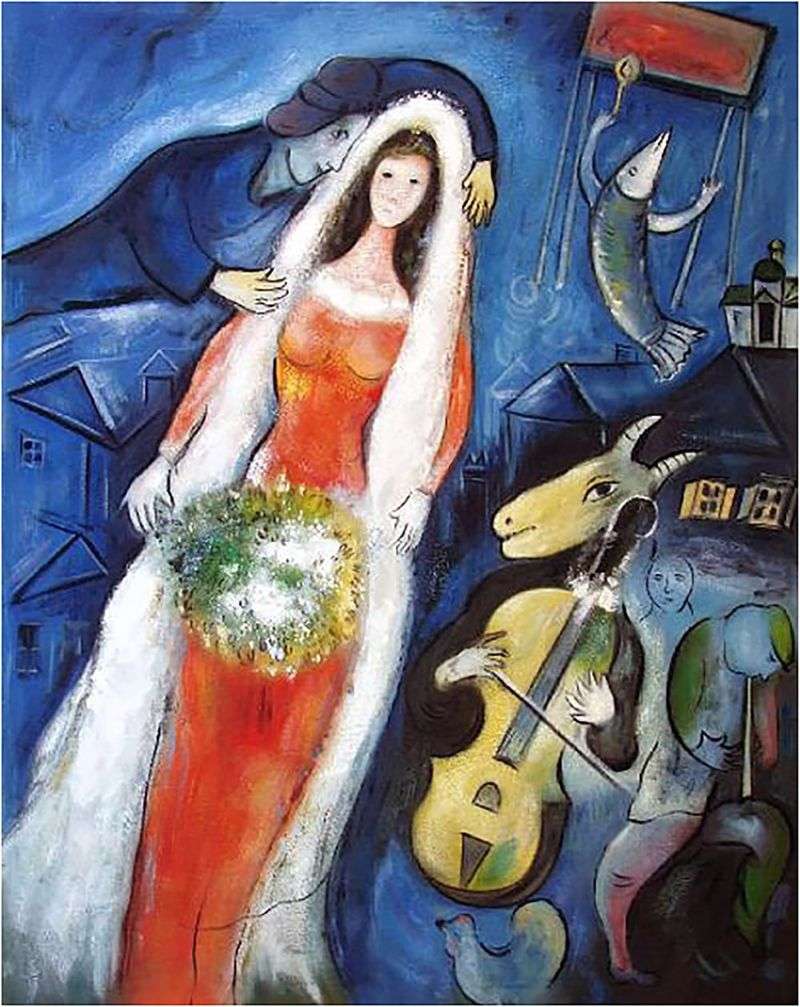 The image of the bride is found more than once in the canvases of Marc Chagall, especially on the eve of the wedding of the painter on Belle Rosenfeld. However, the presented work “Bride” stands out from the general series – Bella has long been dead, and this is not an ode to love and tenderness. The picture combines both features inherent in the author’s style, familiar and recognizable, and innovative ideas.

First of all, the innovations concern the choice of the color palette – a blue-gray background with a set of symbolic and fantastic images, in the foreground of which the bride stands. She has a red dress and a white veil to the floor, and in her hands a green branch of flowers – the girl seems to come out of the canvas, rushing to the viewer. One critic once remarked that looking at this picture, it seems that this girl is not someone’s abstract narrowed, namely yours, and her attentive gaze of small eyes is aimed at you. The composition of the painting is “collected” from various national Jewish leitmotifs – a goat playing the cello, a musician-flutist, a girl with pigtails.

The author also saturates the space of the canvas with symbols, such as a fish with a candle in the fin, a squirrel under the cello, and, of course, a church that can not be seen right away. A bright bride is surrounded by a man’s attention – he either lovingly embraces the girl, or carefully adjusts the veil on her head. The image of the girl turned out to be somehow fantastic and unreal. Not surprisingly, many interpret this work of the painter as an attempt to express longing for what he has long lost.

An interesting fact: the picture “Bride” can be seen on the poster in the apartment of the main character in the movie “Notting Hill” with Julia Roberts and Hugh Grant. This was due to the fact that the writer of the famous film is a big fan of Chagall and could not miss the opportunity to “quote” him in one of the scenes.