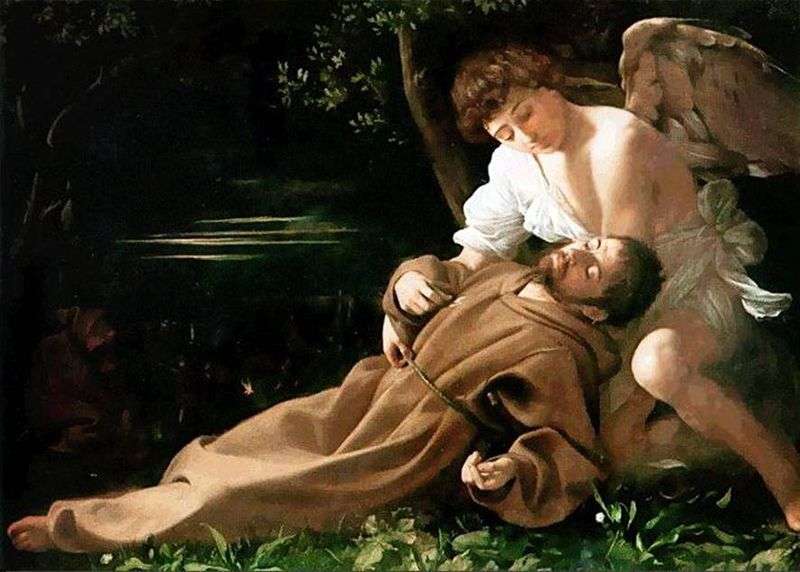 The painting of the Italian artist Merisi da Caravaggio “The Bliss of St. Francis” is also known under another name “Ecstasy of St. Francis”. The size of the painting is 92.5 x 128 cm, canvas, oil. In the Middle Ages, the process of adapting scientific knowledge and the model of secular education to Christianity, which began in the days of antiquity, continued.

The most important result of this process was the creation of a picture of the world, combining the terminology and many provisions of Aristotle’s metaphysics with the biblical teaching of the creation of the world. Such a process of adaptation was also in the lower culture, where Christian worship came into contact with popular beliefs.

One of the most noticeable results of this contact was the cult of saints spread throughout Europe. However, in both high and low culture, this process was associated with considerable difficulties.

An example is the condemnation by the church of the so-called Parisian Averroists, a philosophical trend recognizing the Aristotelian idea of the eternity of the world, the crusades against heretical teachings of Cathars, Waldenses, etc. Blessed ascetic Francis of Assisi, an Italian preacher, founder of the Franciscan order, author of religious poetic works.

Since 1207, he subordinated his life to serving the spiritual heritage of Jesus Christ, becoming a preacher. Soon he had followers in Italy and almost all European countries that were organized into Franciscan fraternities. In 1228, Francis of Assisi was canonized. Stories, legends about him are collected in the poetic anonymous collection of the mature Middle Ages “Flowers of St. Francis of Assisi.”