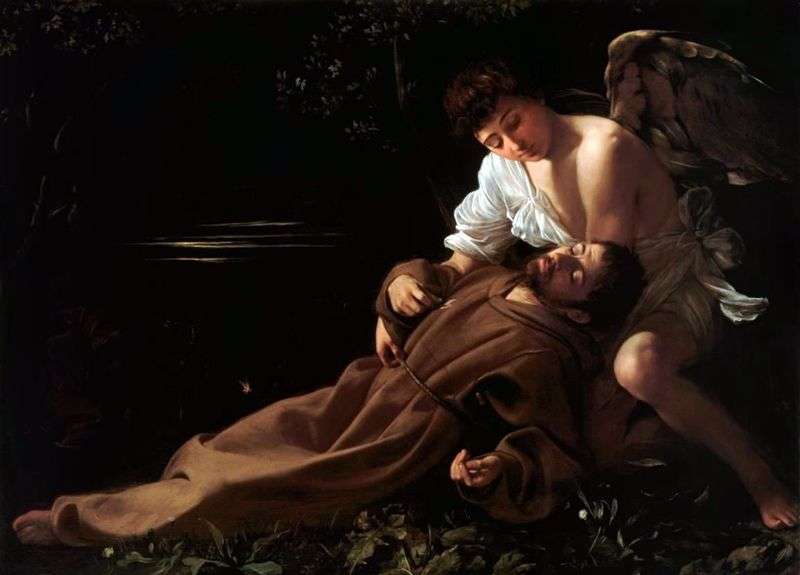 “Ecstasy of St. Francis” is the work of the Italian Baroque master Michelangelo Merizi da Caravaggio.

The painting is the first canvas of Caravaggio on a religious theme. It dates back to 1595 and was created after Cardinal Francesco Maria del Monte became the patron saint of the artist. It is considered one of the first paintings performed by Caravaggio in the status of “artist Del Monte”.

It is depicted in the painting of Saint Francis of Assisi at the time of receiving the wounds left in the body of Christ during the crucifixion.

In 1224, Francisco retired to the desert with a small number of his followers to contemplate God. At night on the slope of the mountain, Brother Leo saw a six-winged seraph, who descended in response to the prayers of Francisco, so that he could know the sufferings of Christ and his love.

Suddenly a dazzling light appeared. As if the heavens opened and, splashing all their glory, brought down the waterfall of flowers and stars. In the center of this bright whirlpool, a ray flashed dazzlingly and fell right in front of the pointed rocks on which stood Francisco. In the light a figure appeared with the face of Jesus and wings, two of which were enveloped in fire and directed upward, the other two were opened in a horizontal direction, and the latter walked along the figure. Glittering wounds carried an expression of supernatural beauty and sadness.

Suddenly, the streams of fire from the wounds of the angel pierced the hands and feet of Francisco, like nails, a ray of light poured into his body, and blood poured out of the wounds. Francisco gave a powerful cry, filled with joy and pain. A fiery image, like a mirror, reflected the figure. Then the angel disappeared, and the bloody Francisco fell to the ground.

The picture of Caravaggio is less dramatic. The six-winged seraph is replaced by an angel with two feathery wings. Neither the violence of the legend, nor the pools of blood, cries, fiery images of Christ are there. A gentle angel holds a fallen saint and seems bigger in size. The satellites of Francisco are almost invisible in the darkness in the background.