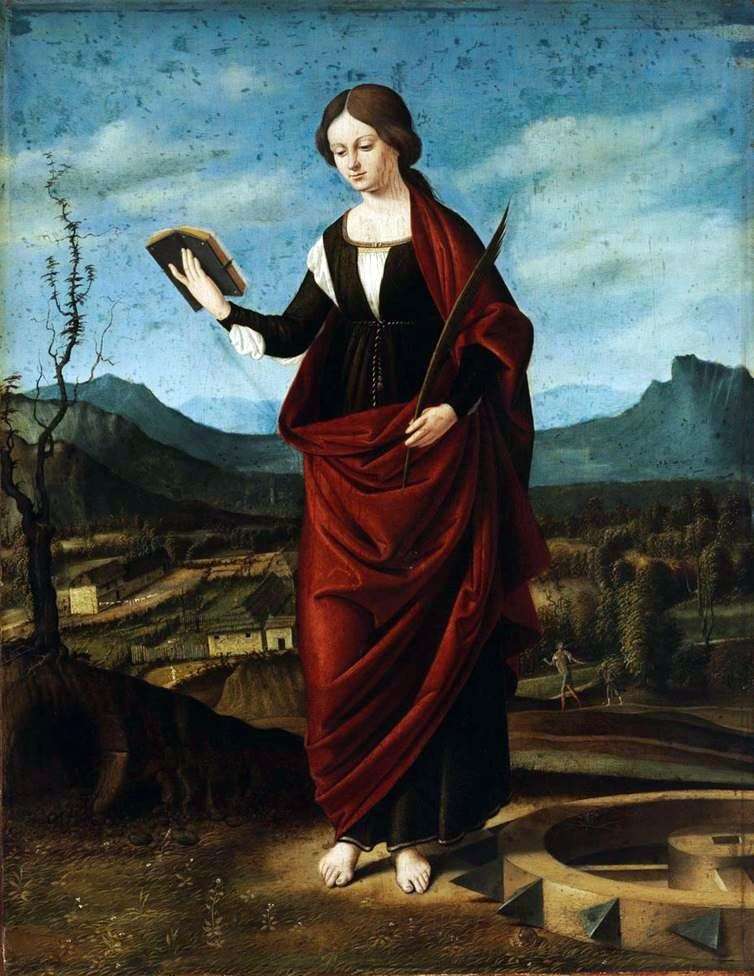 In the 1610s, judging by the ancient inscription on the back of the board, was in the collection of Orleans. Exhibited in 1968 at the exhibition “Venetian painting of the XV-XVIII centuries” in Warsaw, Prague, Dresden and Budapest. St. Catherine stands in a calm meditative pose, in her left hand she holds a palm branch pointing to her martyrdom, in the right is a book symbolizing the victory of Christian ideas over pagan teachings.

In the foreground lies the wheel – the weapon of her death. The backdrop of this small picture indicates that this carefully painted picture was deeply thought out and felt. It is noticeable the influence of Chima and Conegliano, especially depicting the seasons of the illustrations that he made to the codes.

The monotonous coloring of the picture shows that the Venetian painting was enriched with the technique of tonal painting. In the left part of the landscape in the background are village houses with gardens, a well, white linen drying on a rope. On the right are two warriors. The author of the painting, Marco Bazauti, probably a Greek by birth, studied with Alvise Vivarini, in whose work there are aspirations, to a certain extent, opposite to the style of Bellini.

The image of the figure of St. Catherine in this picture is very plastic, it also affects the influence of Antonello da Messina, transmitted through Vivarini. This picture refers to the earliest works of Basaiti. Later the master falls under the full influence of Bellini.