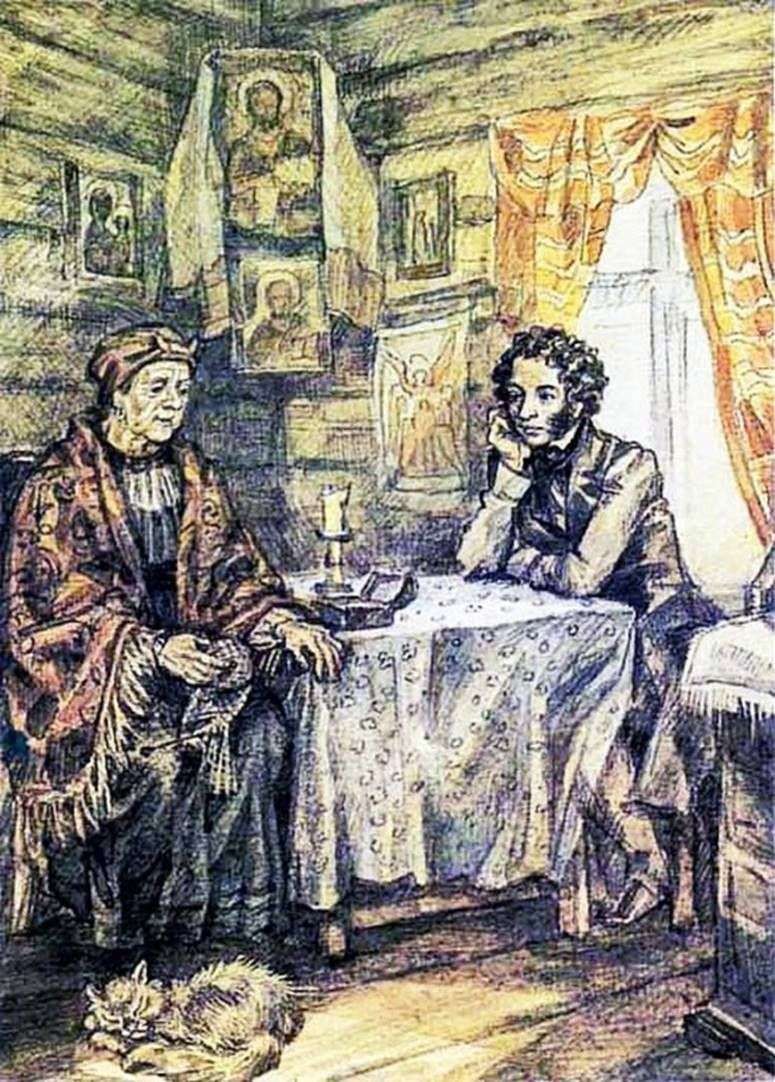 Ivanov Yuri Valentinovich is a famous book illustrator, a deserved Russian artist and graphite. His pen belongs to such a well-known painting as “Pushkin and Arina Rodionovna.”

This picture is very homey and cozy. Impregnated with love and warmth. On the canvas, we see the famous Pushkin Alexander Sergeevich and his nanny Arina Rodionovna. They sit in a small cozy little room at a small table. On the table there is a candle and a box with which Arina Rodionovna took out things for the yarn. The tablecloth covering the table is white with dark patterns. On the wall behind them hangs many icons.

Behind Alexander Pushkin, a light window is decorated with yellow-orange curtains. On the right in the picture is a nightstand.

Pushkin quietly sits, leaning on his hand, and dreams about something. He has a beautiful, light gray suit, a white shirt and a butterfly. Hair curly with long whiskers. Nanny also sits in a certain idea. She wears a dark sarafan, covered with a large multi-colored shawl. The head is tied with a handkerchief. In her hands she holds yarn. At her feet, the cat sleeps peacefully. Although the colors are not very bright, but at the same time warm. Perhaps, according to the sad face of Alexander Sergeyevich, there may seem to many a tragedy of the picture, some of his life experiences, but if you look closely, you will understand that the author wanted to show so that it does not happen in life, everything can be experienced. The main thing would be who to talk to.

Looking at the picture of Ivanov Yuri “Pushkin and Arina Rodionovna” for some reason I immediately recall the novel in Pushkin’s poems “Eugene Onegin”. It is those lines where he talks to the nurse about the mug. I really like this novel and the picture of Yu. V. Ivanov. She is kind, light and cozy. Peace and humility awakens in the soul when you look at it. It would be more than such kind works.