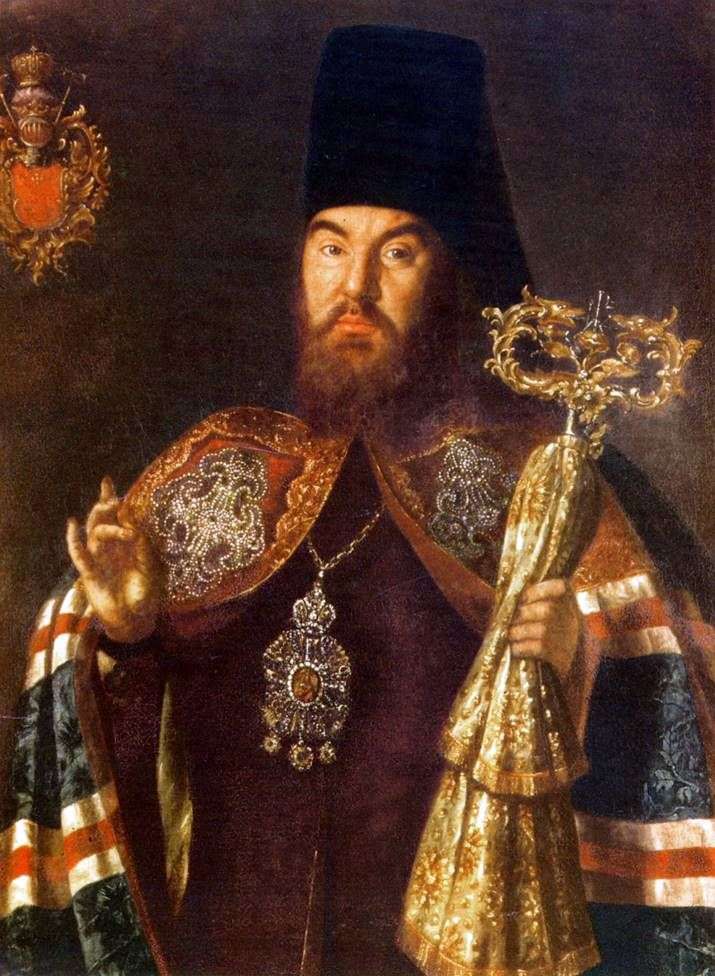 Heavy and puffy Sylvester Kulyabka is depicted in full episcopal vestments: in a felony, a hood, with a staff and panagia. On a dark background – the birth coat of arms of Kulyabok. Reverend Sylvester was born in the city of Lubny, Poltava province, in the family of a bunchuk comrade. In 1726 he graduated from the Kiev Theological Academy; in March 1727 he took monastic vows and entered the brotherhood of the Kyiv Mezhigorsky Monastery. Soon, Sylvester’s father was appointed to serve in the Kiev Academy, where until 1745 he served as a teacher, prefect and rector.

In 1744 he was summoned to St. Petersburg for the priesthood, where he showed himself as an outstanding preacher and was left until his new appointment. On November 10, 1745, his episcopal consecration took place with the appointment to the Kostroma cathedra. Kostroma diocese Bishop Sylvester ruled for five years – until July 27, 1750. The Most Reverend had a lot of work to improve the new diocese; especially he cared about the spiritual school opened at the Ipatiev Monastery in 1747, which soon was transformed into the Kostroma Theological Seminary. During the last ten years of his life, until April 1761, Bishop Sylvester, in the office of the archbishop, ruled the St. Petersburg diocese.

Almost all this time he lived in the Alexander Nevsky Monastery, in seclusion and simplicity, without any splendor and luxury. According to contemporaries, His Grace Sylvester was sincerely pious, strictly observed the monastic statutes, often performed divine services. He left behind many theological works, in manuscript form, which were later stored in the Kiev Theological Academy. By the nature of his service in the Synod, AP Antropov wrote many higher clerics. “Archbishop Sylvester Kulyabka” refers to a series of portraits of the abbots of the Alexander Nevsky Monastery, performed by the artist in 1760-1770. In the works of Antropov, a passion for a peculiar decorativeism is felt, which is combined with careful writing out of details. This affected the traditions of folk applied art, as well as icon painting and the Russian parsuna of the XVII century.

In the iconographic manner, the entire figure of the archbishop and especially the blessing hand are interpreted in a planar manner. But still it is a secular portrait, executed with great pictorial skill. The exquisite is registered, with a convex pattern and fringe, the sulok is a cloth covering the staff. Beautifully brownish-red mantle, trimmed with braid and pearls. The portrait is executed with a deep attention to the appearance of the model and surpasses many other anthropic portraits of church leaders. He impresses with the true power of the image.