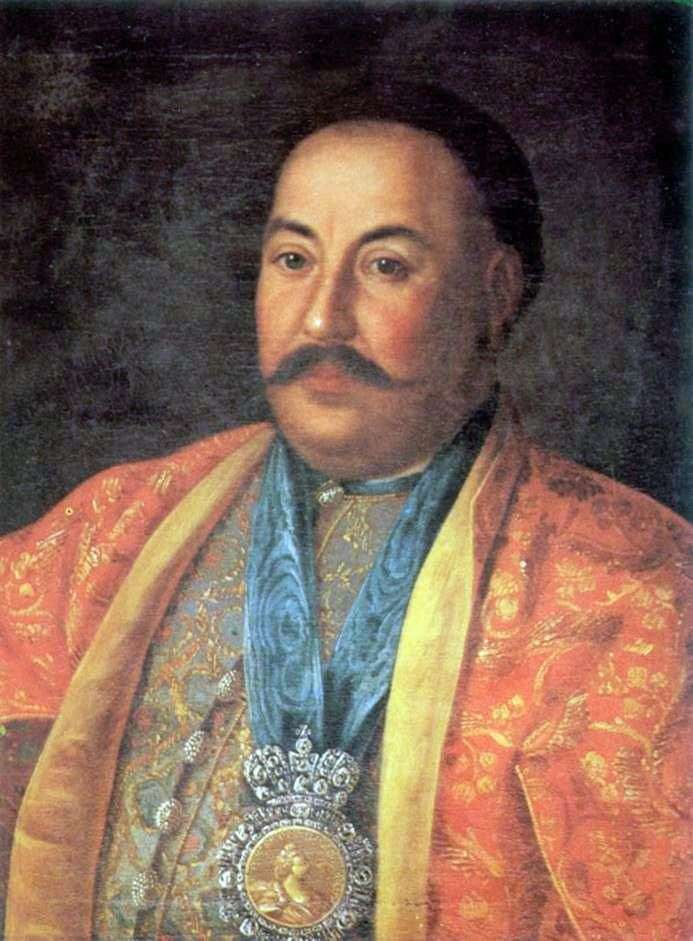 The portrait of Ataman F. I. Krasnoshchekov is sparingly and lapidary. The image is built on large volumes, which are combined with decorative garment patterns. In the generalized, planar composition of the composition and the bright colors of the work, the parsun traditions have affected. F. I. Krasnoshchekov presented quite schematically. The shape of the head is simple, generalized and strongly delineated by a line. Antropov gives vent to his rich decorative feeling and covers the ataman’s clothes with a magnificent pattern. Pure colors burn on scarlet caftan, tinted with golden divorces.

Not embarrassed by the variegatedness, the artist immediately depicts the deep cornflower blue of the order ribbon. As a result, he achieves a somewhat coarse, but powerful color, which was affected by the heritage of Old Russian icon painting. At the same time, with all the schematism of the image, before us is a living person – aging and somewhat flabbergasted. Marching ataman Brigadier Fedor Ivanovich Krasnoshchekov especially distinguished himself during the Seven Years’ War with Prussia. In 1761 he came to Petersburg, where he stayed for a while. Then his portrait was painted. Ataman witnessed the accession to the throne of Peter III, who immediately concluded peace with the Prussian king Frederick II, as a result of which Russia, with one stroke of the royal pen, lost all of its heavy losses of advantages gained by the price. Naturally, FI Krasnoshchekov, a member of the military operations against Prussia, fully accepted the side of Catherine II during the palace coup in 1762 and was invited to the coronation celebrations in Moscow, at the end of which he was handed to the highest order by a saber “with the diploma of the Tsar concerning his zealous service in this war.” As early as in 1742, the ataman was presented with a miniature portrait of Empress Elizaveta Petrovna, framed by diamonds.

With this portrait, slightly enlarged and highlighted, he also wrote Antropov, using for decoration the bright blue color of the tape. A custom portrait of the ataman, undoubtedly, was written from nature. The artist recreates such features of appearance that can be fixed only by direct observation: a crease on the forehead, wrinkles under the eyes, a smooth double chin. F. I. Krasnoshchekov – marching ataman of the Cossack regiments, son of the famous Don hero, who frightened his enemies with his courage, “wild look” and face, completely covered with scars. F. I. Krasnoshchekov himself was famous for his courage. He was a participant of the Seven Years’ War. During which, with his Cossacks, “he had to disturb the enemy in every possible way.”

In the battles Krasnoshchekov showed courage, courage and fearlessness, received the rank of foreman, then the general-major. He was awarded a gold medal for the Cossacks, a “diamond-coated” medal for wearing around his neck. He was cunning and clever, he was among the Cossacks as a sorcerer. In the people about Krasnoshchekov composed songs, calling him “a dashing rider” and “a glorious hero”. It is depicted in the colorful attire of the Cossack ataman, on his chest – a medal of honor; according to J. Shtelin, Antropov painted this portrait for the “hetman” Razumovsky.