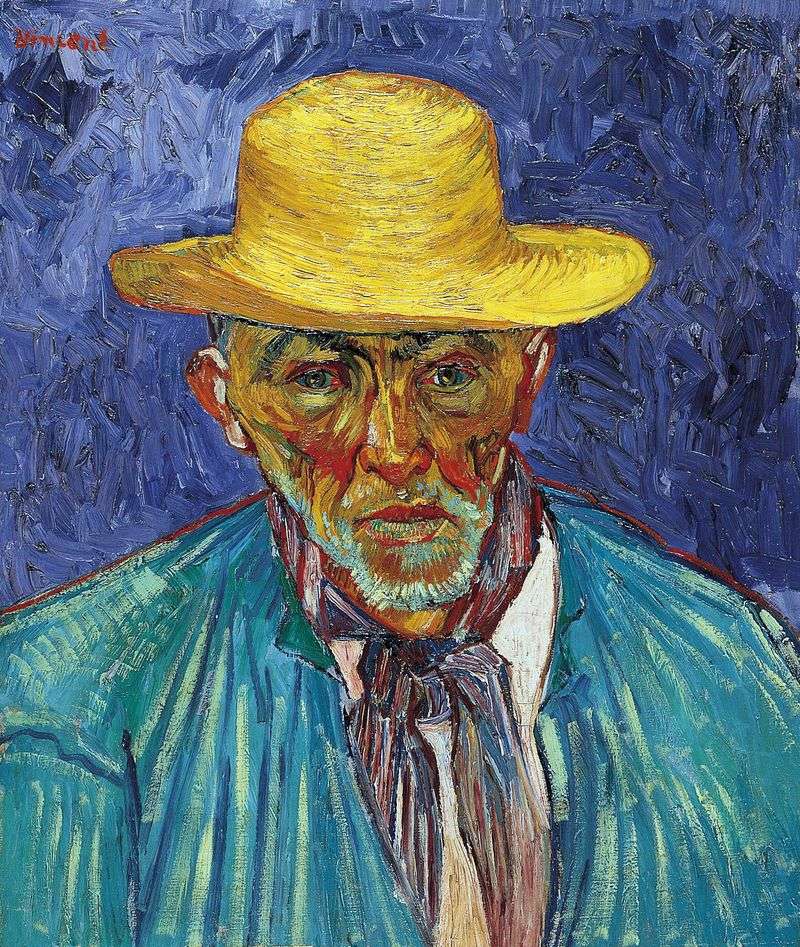 The fruitful Arlesky period of the artist is marked by such an outstanding work as Portrait of the Solitaire Escalier, which is a turning point in the artist’s work. Meyer Shapiro writes about this picture as follows: … I would even call the canvas the last realistic portrait of a peasant, performed in the traditions of Western European art. It is possible that this is the only outstanding portrait of a villager. In a sense, this work absorbed the best manifestations of the vast variety of works by Van Gogh.

Vincent never ceased to feel a spiritual kinship with a simple worker. This is clearly

shown by many of his Nuennen paintings and sketches, as well as his copies of the works of Jean Francois Millet, who, in turn, also with pleasure elected his subjects plots of peasants. The choice fell on Solitaire Escalier not by chance: throughout his artistic career, Van Gogh had a genuine affection for the real peasant breed. And yet, if we talk about the style of the artist, this picture indicates a sharp change in trends in the author’s work since the days of Nuenen and, moreover, it is radically different from the works written by Van Gogh just a few months before. Portrait of Escalier Solitaire is in many ways a turning point in Van Gogh’s creative career. In a letter to Theo Van Gogh comments on his work this way: “…

Vincent tells his brother about this picture in his letter and, what is significant, he especially stresses that his view of painting is gradually returning to the period preceding his arrival in Paris. During the two years that Vincent lived with his brother in Paris, he met with a huge number of outstanding artists of those times: Gauguin, Lautrec, Pissarro and Siera – these are just a few of them. The style of these authors and their non-standard fresh ideas influenced the formation of Vincent’s individual painting technique. And yet, it is necessary to note the following: in a letter of 520 Van Gogh himself says that he is returning to his earlier approach to art and, at the same time, goes beyond what he was able to learn from the Impressionists.

Van Gogh evolves, acquiring a new unique style, so attractive and peculiar to him alone. Vincent boldly and unconventional experimenting with color on the canvas Portrait of Solitaire Escalier. In a letter to Emil Bernard, Vincent says: “Again, the color palette of the picture suggests the midday heat, like the one in the middle of summer.” Without these colors, the picture would look quite different. ” Jan Hulsker writes: Although the portrait of Escalier Solitaire is undoubtedly an outstanding and surprising sight, it does not fully create the impression of heat and dazzling sunlight, which is implicit in Vincent’s description. The strongest effect is not created by the red and orange hues of the shepherd’s face, but rather by the bright yellow straw hat against the background of the dark blue sky.

And only a few weeks later, when the old peasant agreed to pose for the second portrait, Vincent really managed to achieve the intended “exaggeration.” While Hulsker is right in asserting that Van Gogh was the most successful person to realize what was conceived in the second portrait, the first portrait, after all, is one of the most important paintings among all written by the artist.