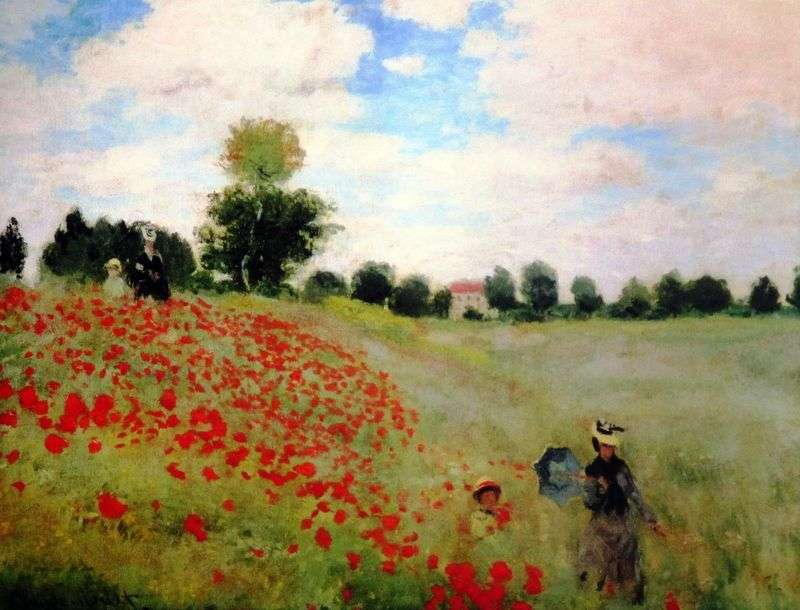 The painting “Field of Poppies”, presented at the first exhibition of the Impressionists, depicts his wife Monet Camilla and their son Jean in a field near his house in Arzhantey. As in many other works of Monet, Camilla is drawn with an umbrella in her hands, and his graceful outlines give the picture a special charm.

Wanting to convey a sense of movement, Monet added a second pair of figures, on top of a hill. They are connected to the figures in the foreground by a barely perceptible path running through the grass.

Monet wrote “Field of Poppies” in the open air, on a small portable canvas. Although the picture conveys a natural, spontaneous sensation, it is carefully arranged. This is expressed not only in the fact that the artist twice repeated figures on it, but also in the choice of the angle, which is set in such a way that the bright poppies that fill the left part of the composition are located diagonally, along which Camilla and Jean walk, as if leaving beyond the picture.

The rich color and movement that is filled with this area of the picture is in verified contrast with the calm tones of the upper right edge of the canvas, where the terracotta roof of the house skillfully links the background with the foreground of the composition.