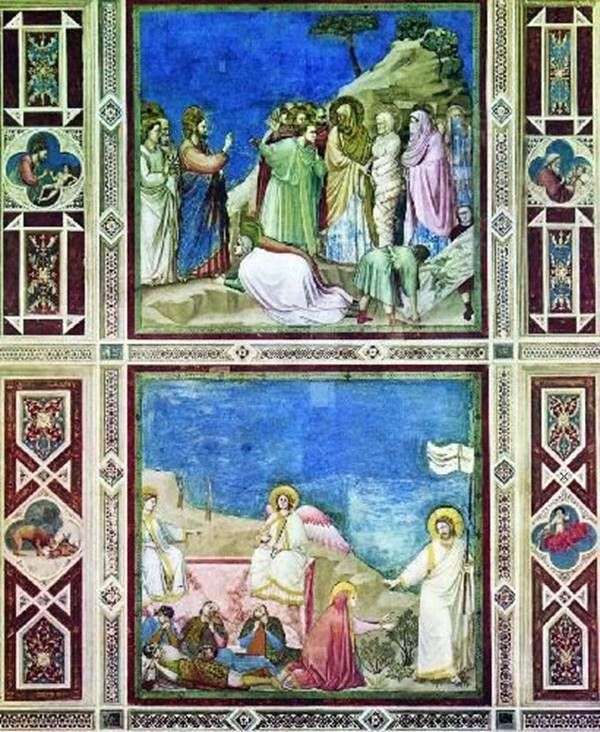 The most famous works of Giotto are murals in the Arena in the Padua. named so because in its place was once the circus arena. The chapel was built in the very beginning of the 14th century. the Paduan banker Enrico Scrovegni, who ordered Giotto to perform the paintings, and Giovanni Pisano – the statue of the Madonna and the Child.

A relatively small chapel has the shape of an elongated rectangle. One who crosses its threshold, stops in a joyful amazement: so much light and space in a relatively small room. This impression is due to Giotto’s frescoes with their radiant colors and clarity of form.

On a coldish blue background, figures are depicted in yellow, pink, green tones. The painting is dedicated to the life of the Mother of God and of Christ. On the wall at the entrance there is the “Last Judgment”, opposite is the “Annunciation”. On the long walls are arranged in three rows of independent compositions. They are related to each other as scenes of one story. The narration is unhurried and uncomplicated, full of quiet dignity. The figures are depicted against a background of natural and architectural scenery.

The images of Giotto are natural, human, reserved, faces of the same type, the details are mean. The artist expressively used the language of gestures, movements, generalized silhouettes, conveyed various shades of simple human feelings and states of mind. Each composition, being a part of the whole, can be perceived as an independent work.