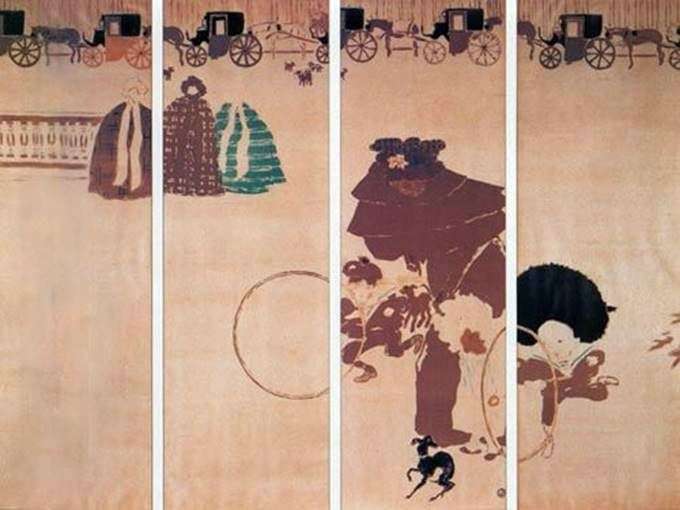 This work refers to the period of “Nabis,” characterized by the artist’s passion for decorative and applied art. The original “Nanny for a walk” is a screen consisting of four panels. Later, Bonnard reproduced the “Nanny” in the form of a lithograph of five colors, which you see on this page.

In one of his letters the artist says that he painted on the screen the Concorde Square in Paris, “resembling a dusty Sahara”. This feeling is imprinted on him in the composition of the screen, where figures far removed from each other emphasize the desolation of the square. Bonnar habitually combines the plane with the depth of space, creating three distinctly visible planes. In the foreground, he places figures of a woman and children, on the middle plan – figures of nannies. The carriages lined up in the background.

One of the features of applied art are the repeating elements, and Bonnard generously uses them, drawing the wheels of the crews, the figures of the dogs and the hoods of the nannies. The rigid formality of the upper frieze is mitigated by the figures of the mother and children. Their silhouettes are written with incredible distortions – this, in the first place, refers to the cap of the child, placed on the right. Hoops that children roll, echo with the wheels of the crews and move from one panel to another, collecting the entire composition.