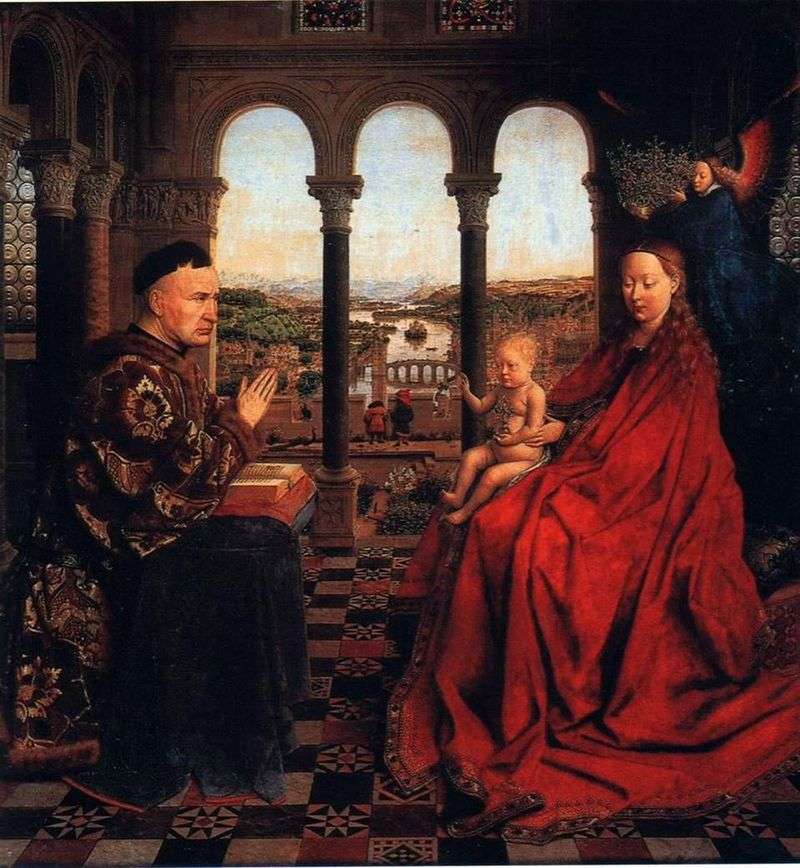 The first documentary information about this painting dates back to 1778. It is not signed, but most experts agree that its author, no doubt, was Jan van Eyck. The work represents the spectator of the Burgundian chancellor Nicholas Rolen, prayerfully bent before the Madonna and the Child. In 1408, Rolen joined the service of John the Fearless, the Duke of Burgundy, and in 1422 the son of John Philip the Good, who succeeded his father, made Rolen into the Chancellors.

This post Rolen occupied for 40 years, during this time incredibly rich. He invested a lot of money in construction. Supported by Rolen and painters – in his hometown Oton he was a famous patron. Now this city is located on the territory of France, and in those days was part of the duchy of Burgundy. The picture in question, most likely, the chancellor ordered in 1431 for the Oton family tomb of Rolenov. According to another version, he gave it to the local Cathedral.

Van Eyck used in his works images of real people, showing the world the first samples of portraiture. And it would be more correct to call this painting a portrait of the all-powerful Chancellor of the Burgundian court of Nicholas Rolen, although Madonna and the Child Christ are present in the picture. Chancellor Rolen is turned to the Madonna, both figures are almost on the same level and almost the same in size. The gesture of the Baby is directed to Rolen. They are presented as partners who are familiar to each other, and therefore the attention between them is evenly distributed. This manifested a new attitude of the artist to man, a new understanding of his place in the world.

Although the restrained pose and prayerfully folded hands give the figure of Rolen some stiffness, this does not stop the artist from achieving the striking life truth and integrity of the image. Behind Madonna and the Chancellor, behind the carved columns of jasper and agate, you can see the landscape. The river is winding up towards the horizon. Boats and barges swim along the water, washing the islands and overgrown with shores of the shore. Bluish mountains close the horizon. On the banks of the river is a large city. On its narrow streets people scurry about in colorful clothes. Each detail of the landscape is inimitable, everything speaks of the artist’s enthusiastic attitude to the world. The image is so true that the viewer feels like he has been to this city.