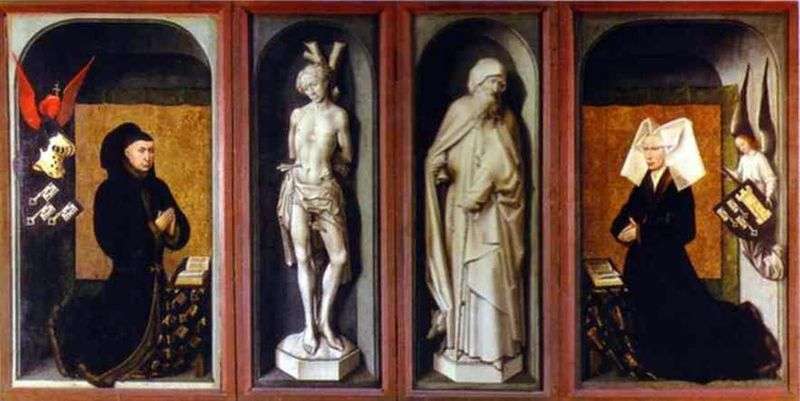 Rogier van der Weyden is one of the best portraitists of his time. To us, unfortunately, only five portraits, with a greater or lesser degree of credibility attributed to the master, have come down. Working on portraits, Rogier used the techniques discovered by Van Etom, who first began to build simple, geometrically clear compositions and preferred to depict clients on an even dark background.

These techniques Rogir developed and gave the portrait an intimate sound, trying as deeply as possible to reveal the inner world of the person posing him. On the next page you can see the amazing “Portrait of a Young Woman”, owned by Rogier. It seems that before us – a typical city woman of the XV century.

Dismissed eyes, humbly folded hands. But behind this “on duty” pose is depth and mystery. With even more intimacy and warmth, a woman’s portrait is painted, “Portrait of a Young Woman”. The woman portrayed on this portrait looks at the artist with a direct and open look, which indicates an undoubted spiritual affinity between them. With no less attention the master approached and to man’s portraits. An example of this is the “Portrait of Antony of Burgundy”.

A lot of portraits we can find in the altarpieces, belonging to the brush of Rogier van der Weyden. Following the tradition that existed at that time, Rogier included in the composition of the altarpiece portraits of philanthropists who paid for the creation of the picture. So, on the back of the polyptych “Last Judgment”, 1445-50 Rogier wrote to Chancellor Rolen and his wife. They are depicted kneeling before holy Sebastian and Saint Anthony.