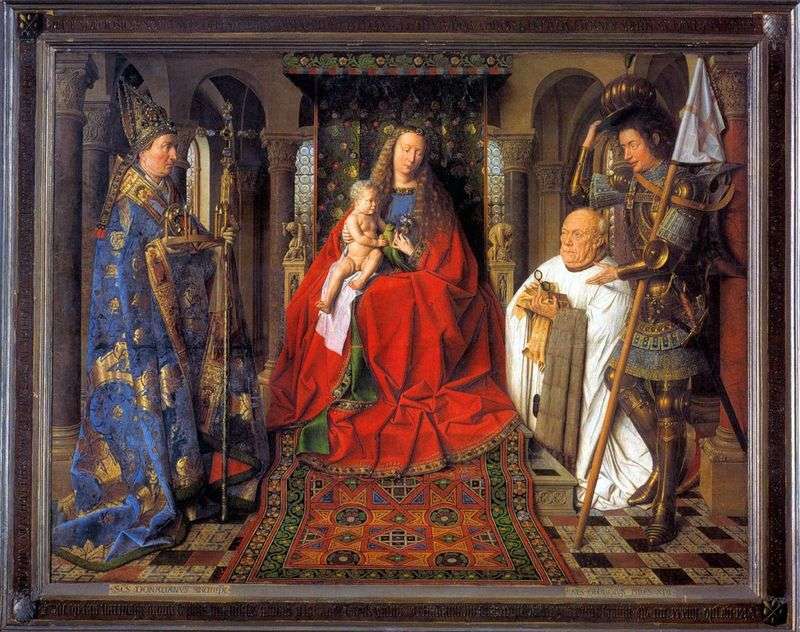 The customer of the painting was the canon van der Palet. As in the “Madonna of Chancellor Rolina,” Van Eyck is trying to show the presence of the divine in the real world. The canon is shown in a real, recognizable palace, in the choir of the cathedral church of St. Donatian in Bruges, which gives the reality to Mary with the Child. Near St. George and St. Donatian.

Researchers believe that the picture was once hung in, now destroyed, the church and reflected the actual interior. His portrait strikes a deep penetration into the very essence of character. In all the details of the picture van Eyck achieves the impression of the greatest materiality and material tangibility. Literally palpable skin of the old man, Canon van der Pale, with its dry wrinkles and folds, or the hard gold-embroidered brocade brocade of Archbishop Donatsian, his miter with precious stones, is palpable.

On the other hand – the world of the Bible: the merciful God sent a son, the Christ of Deliverer, into the world on both sides of the throne – the images of Adam and Eve, above them: the redemption of sin – Perhaps through the power of faith. And in the depths – columns of arches with a scene Abraham sacrifices his son Jacob, obeying God. And next to the holy and mortal Mary and the Infant look at the thoughtful old man, in their hands a bunch of flowers and a parrot – a hint at the Garden of Eden.