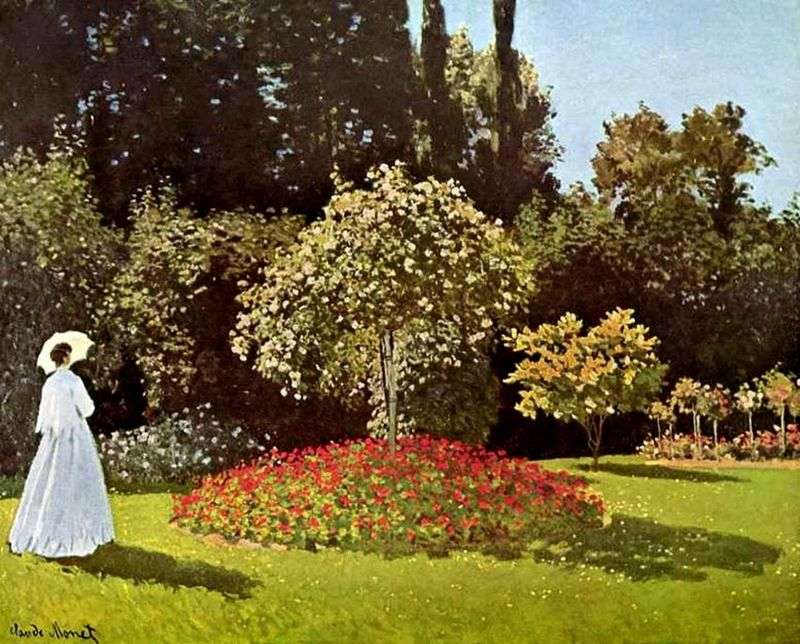 When Claude Monet painted a picture, now known as The Lady in the Garden, he had already declared himself as a innovator in landscape painting, rebelled against the rules and recipes of old art. The artist considered it insufficient to write etudes in nature, and then in the workshop to create a picture of them. In an effort to capture the nature he sees more accurately and directly, Monet decided to take a bold step: he began to paint the picture directly from life or, as they began to say, in the open air.

The image of nature has acquired a special freshness and concreteness. However, the new method led to somewhat unexpected results and forced the artist to make far-reaching conclusions. Monet realized that when depicting the ever-changing nature, the main task was to transfer sunlight. In the painting “The Lady in the Garden,” Monet chooses the morning hour, when light and shadows are separated more clearly than at a hot afternoon, while paints retain brightness and purity.

In accordance with the basic concept, it emphasizes black and white contrasts: against the dark wall of the poplars, saturated with sunlight spots sparkle – a flowering tree; behind it, in the depths, is another; and to the left is the figure of a young woman in a blue dress. In an effort to achieve maximum effect in the transmission of lighting, Monet thickens the shadows around objects. However, carefully observing nature, the artist saw that the shadows were filled with light. Therefore, in his landscapes, he tries to avoid the dull blackness in shaded places and, if possible, not to use black paint.

In the painting “The Lady in the Garden,” he still does not fully succeed. Monet transmits the intensity of illumination with pure color. So, he writes flowers on the sunny side of a flower bed with bright vermilion, on a shaded one with colder klaplak. By the same principle, it differentiates grass greens. A close study of nature leads him to use a large number of shades of green.

In the early picture “The Lady in the Garden” the contrasts of light and shadow are too straightforward, the painting is harsh in places, and the color is somewhat harsh, but it becomes decisive and this becomes the most important feature of all subsequent art. The picture is distinguished by a clear and strict composition, clearly rationalistic for all its naturalness. The fuzzy spatial structure indicates the continuity of the art of Monet with the tradition of all French landscape painting. At the same time, the depicted motif is full of subtle poetry.

Accurate and emotionally saturated, the interpretation of reality became an integral feature of French impressionism, which began in the 1860s by Monet and his associates Pissarro, Sisley, Renoir. The painting entered the Hermitage in 1930 from the State Museum of New Western Art in Moscow.