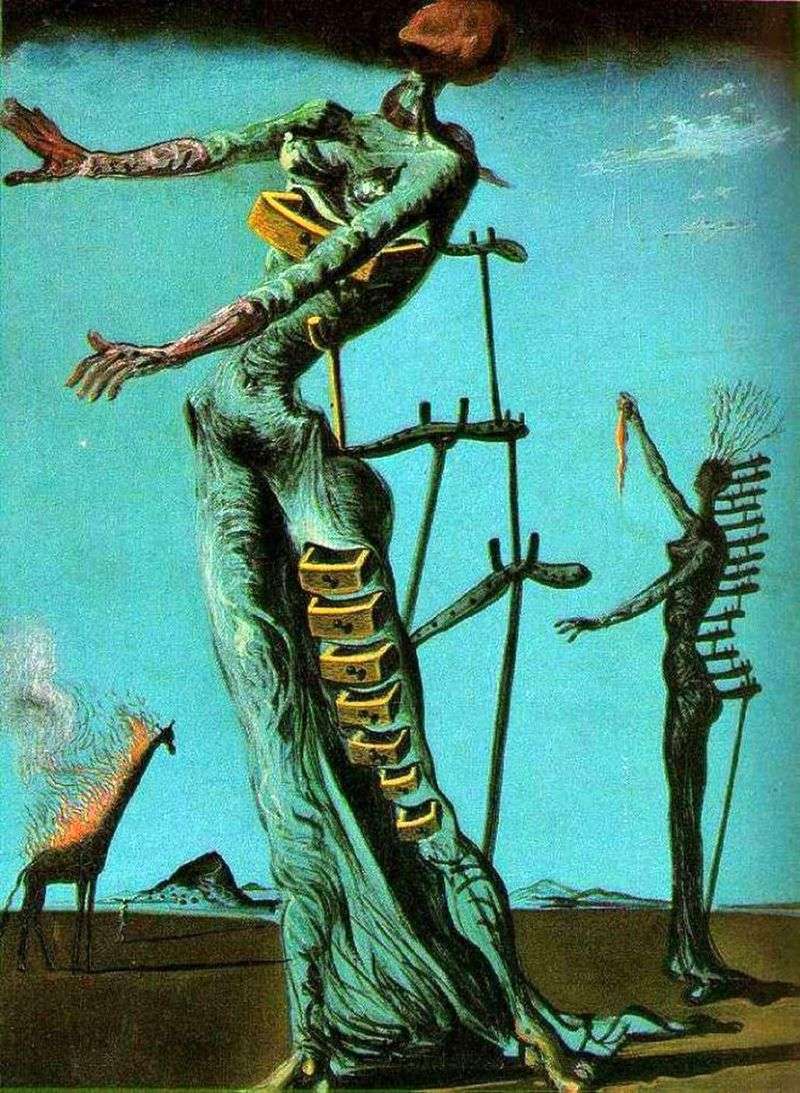 “Giraffe on fire” or, as they call this painting, “The Burning Giraffe” – one of the most famous and important for the great surrealist works. Written this picture was in 1937 before the emigration of the artist in the US in a surreal style.

This picture in a special way echoes with another canvas by the great artist – “The Creation of Monsters.” According to Salvador Dali, these two pictures are a kind of warning about the imminent war. It is characteristic that in both paintings there is an image of a giraffe with a burning back.

The contrast of a bright

red flame with a blue sky emphasizes the special tragedy of the work. The blue-aquamarine overall tone of the picture makes it quite spectacular. A special role in the color scheme of the canvas is played by a combination of red and blue hues. This attracts the viewer’s attention and causes him anxiety.

When you look at the picture, the central figure of a woman is attracted to her, who extends her arms forward. The blood on the woman’s face and forearms does not allow us to see the features of her face. The pose of this woman is filled with helplessness and despair before the inexorable approach of some danger.

Behind the picture is almost the silhouette of another woman. In her hands she holds a piece of meat, which the artist wanted to show weakness and mankind’s desire for self-destruction. Peculiar supports, often used in the works of Dali and personifying the depravity and weakness of man, are depicted behind both figures.

The figure of a burning animal is made much smaller figures of women, it is, as the author himself put it, “the male cosmic apocalyptic monster” and, undoubtedly, the main central image of the picture.

By setting up this picture, Salvador Dali was very good at showing his foreboding of the inexorably advancing war. Although Dali also told about his apoliticality, this picture he demonstrated the struggle against his country.