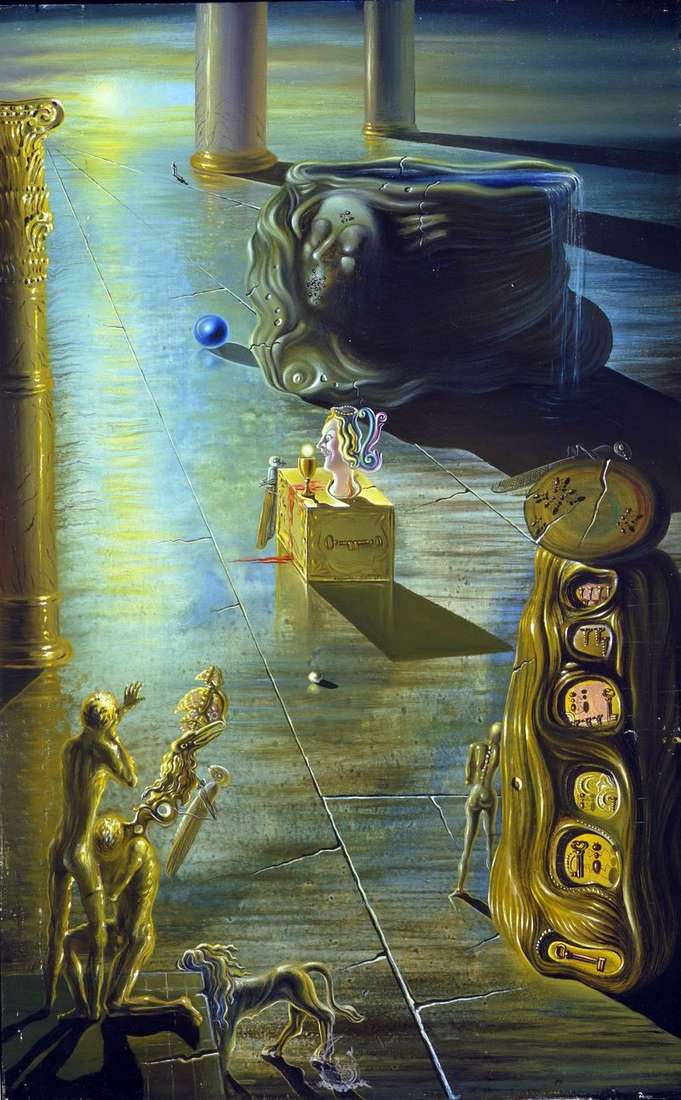 Surrealist Salvador Dali is regarded by critics in two ways. On the one hand, he is a genius, a master of perspective, an unbridled creator of forbidden subjects about what it is customary to keep silent or whisper, on the other, he is an unhealthy man with a perverse mentality, a little boy in the body of a husband. “… They gave a good draftsman, … he’s a disgusting person,” J. Orwell said in his essay. The themes of Salvador’s paintings are covered with symbolism bordering on erotomania. The presented picture “Fountain” is written on a tree in oil in 1930.

impression of the work causes ambiguous feelings. What the author cries about in the composition is a great mystery, which every reader reads into his own worldview. However, try to understand the symbols – signs, still, try. The fountain, which became the center of the plot, is something amorphous with a hint of geometry. As usual, the author resorted to distortion of rough straight lines, so the capacity with the woman’s face at the end turned out to be waxy and pliable. The face turned out both terrible and sleepy at the same time.

Of course, it horrifies the heroes attributed in the lower left corner. The source of fear is not clear until the end, either – the cup itself of the fountain, or – something that can erupt an ugly device. The unguarded figure at the counter with the keys is looking for something. Her thinness screams about the eternal hunger and torment.

A lonely dog guards people from escaping, guarding silence. Despair is read in the positions of the bodies and the dark atmosphere of the picture. The palette is dominated by dark colors, prison dampness, emptiness and cold. The keys that are presented on the right in an amorphous-like cabinet with windows are a source of freedom and a push to escape. However, people do not seek to find the right key, and are chained to the sticky floor in fear of waiting. They practically died, dried up to anorexic thinness. “Fountain” – the personification of a closed soul in the body, a languishing “prisoner” in the crypt from the bones and flesh.

This is a strange display of fears and eternal expectation of a bad end. In the work, Dali himself is imprisoned with his unhealthy interest in necrophilia and coprophagia, but society accepts the genius himself and his talent. Hence, “… society has some flaws…”, as Orwell once wrote, but “… Dali is one of the brightest testimonies…”.