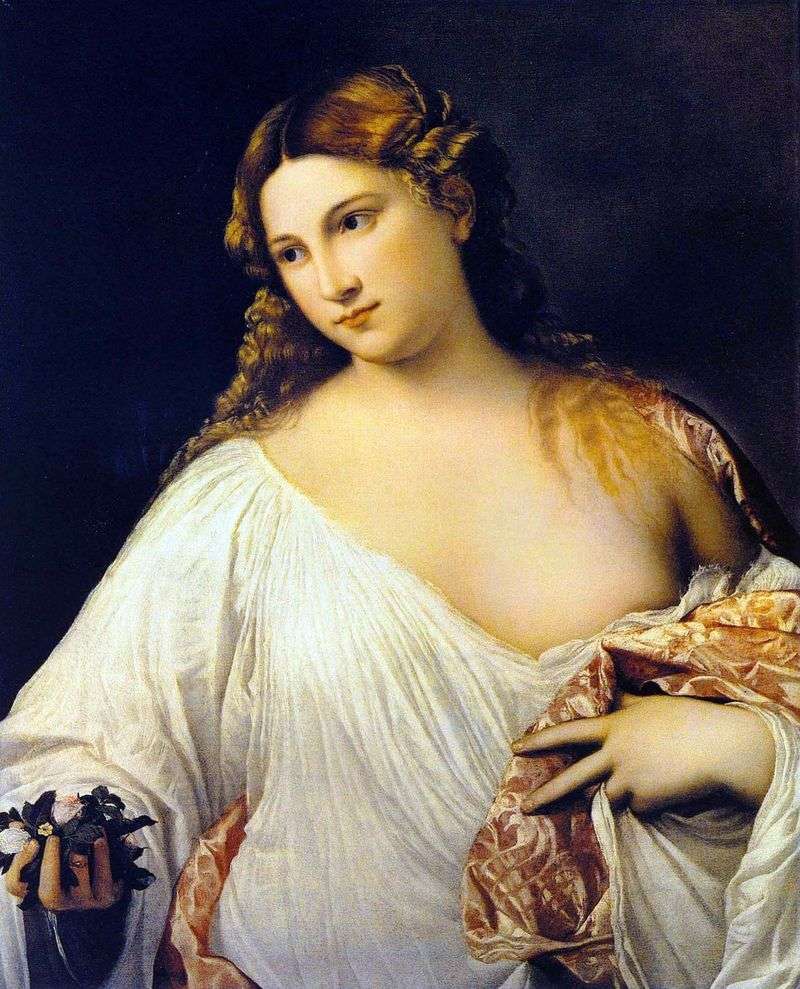 Around the painting “Flora” an outstanding Venetian artist of the era of the High, or, in another way, the Late Revival of Titian, disputes have long ceased. Initially, the authorship of this masterpiece was attributed to another well-known artist of that time, but then the researchers agreed that the painting still belongs to the brush of Titian. But the personality of the heroine is still a mystery to many. It is only known that the picture shows a real Venetian woman.

This is a blossoming young woman of extraordinary, even somewhat idealized beauty. She has long golden hair, a wave falling on the feminine shoulders, and a gentle fair skin. The head of the girl is inclined, the face is beautiful with a healthy blush, the dreamy look of the dark velvet eyes is directed to the side, and on the lips a kind of half-smile froze. Her whole appearance indicates that the beautiful woman is absorbed in her thoughts.

And at the same time her face seems to shine from within with some mysterious fire. His pale-pink clothes falling from one shoulder are supported by a plump, left hand. With her right hand the lady stretches out her bouquet of spring flowers to us. That is why the picture is called “Flora” – the name of the ancient Roman goddess of spring and flowers.

Looking at the young beauty you can only guess who she really was. Perhaps this is someone’s bride, considering her shirt, which looks like a wedding garment. Similar tunics at the time dressed the bride as a symbol of purity and purity. Art critics also point out how the fingers on the beauty’s hand are folded, saying that this is a sign that she will soon part with innocence. Some believe that the picture, on the contrary, depicts a corrupt woman, a courtesan.

However, we can not yet deny the similarity of the heroine to the Roman goddess of spring. Perhaps, the artist drew it, imagining in his head ancient motives, and therefore the image of a young woman turned out so exalted and as if detached from reality. But whoever this beautiful lady is, one thing is clear – her attractive sensual appearance became the true embodiment of femininity, which few people can leave indifferent.