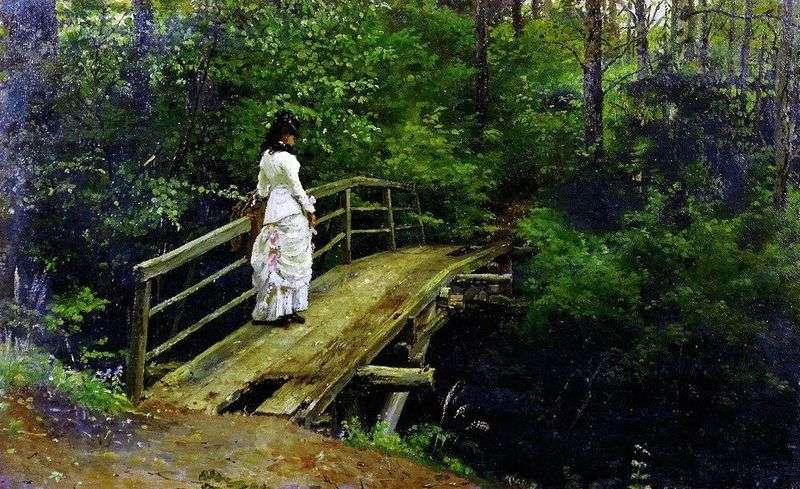 Ilya Efimovich Repin was still a promising student of Ivan Nikolaevich Kramsky, when his future wife had already posed for him for paintings, drawings and sketches. Vera Alekseevna Shevtsova, the daughter of a teacher of drawing and sketching at the Petergof Sheltsov’s cutting factory, Aleksei Ivanovich, was nine years old.

Later, when Verochka turned 16 and she entered the Mariinsky Institute, and Ilya Repin wrote her Burlaks on the Volga in 1871, put them out and the picture was a great success, they got married.

In 1873, I. Ye. Repin received the Vizhe-Lebrun gold medal from the Academy of Arts for expression. Then he received a referral to the World Exhibition in Vienna, where the work was highly appreciated, and Repin became a famous artist in Europe. From 1873 to 1876 Repins lived abroad.

In 1977, the artist for the first time comes to Abramtsevo, the estate of Savva Mamontov, which from now on will be for many years the home of creativity for Ilya Efimovich.

Among the many famous paintings painted during this period, the “Summer Landscape” of 1879 seems very insignificant and little-known. However, if you look at this work in the general perspective of the life and work of Ilya Repin, you can say that a small “landscape with staff” is one of Repin’s intimate and lyrical works. He and Vera have been married for seven years. They have three children and Vera is the main model for Ilya Efimovich. Her life is dedicated to her beloved husband, his work, his ideas and his personality. In the perspective of time, it can be said that this landscape reflected the pinnacle of marital happiness.

Dense, thick shady greenery of an overgrown park, old logs bleached by the sun and bad weather of a small old bridge over a stream. The figure of a woman in a fashionable dress of the late 70s of the 19th century is standing on this staggering structure, as if she had just stopped and is going to go further. Accessories: a white umbrella, almost imperceptible against the background of draperies of a dress, a cape in her left hand, set aside for a minute on the railing of the bridge, black hat, black shoes with heels, black lace at the throat, white jacket – in such a toilet a lady could calmly walk along Nevsky Avenue or Tuileries. But she is here in silence and more often the mysterious Abramtsev. The artist conveys the fragility and sophistication of the figure in contrast with the nature and dilapidation of the building.

And at the same time, we feel the author’s tenderness in a light pink color of the dress, in the feminine grace of the figure in the almost childish contours of a half-turned face.

Then, many years later, they will part, and other women will be the heroines of his paintings, but this landscape with the figure of a beloved woman will remain in the history of painting as a symbol of true Russian landscape lyricism.