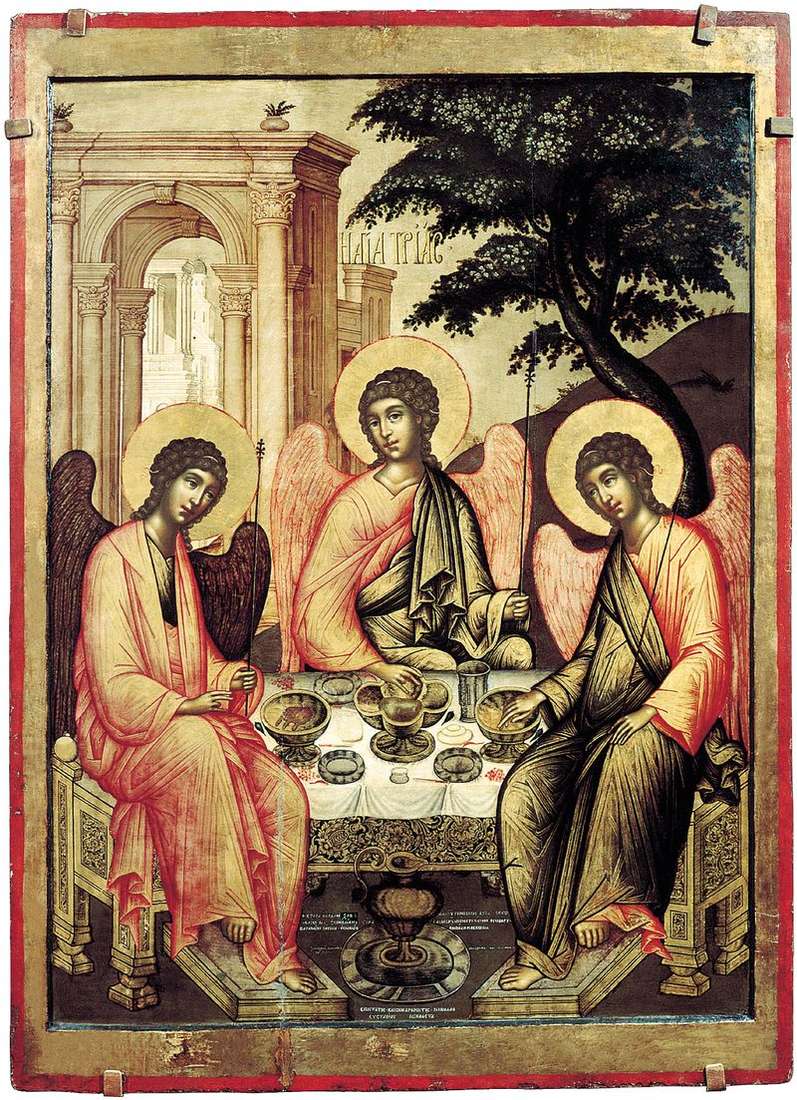 Below on the front side of the icon is the Greek inscription: “… in the summer from Adam 7180, and from the Nativity of Christ 1671, October 16, the care of the royal master named Pimen Fedorov, nicknamed Simon Ushakov, in the city of Moscow…”. Disclosed in 1927-1928. Received from the Gatchina Palace Museum in 1925 State Russian Museum. Simon Ushakov was one of the central figures of Russian culture of the XVII century. His fame was brought not only by the artist’s work, but also by the diverse activities of the teacher, theorist, organizer. For many years Ushakov led the Armory Chamber

in Moscow, which was at that time the main artistic center of the country.

One of the typical works of Simon Ushakov icon “Trinity” was created by him in the period of creative maturity. As the main compositional scheme, mainly in the construction of the central group of angels, Ushakov used the famous “Trinity” of Andrei Rublev. But at the same time he so changed all her spirit and sense that the viewer will feel the difference between two similar works rather than similarity. The main pathos of the “Trinity” Ushakov is to create the appearance of the material, objective world. Angels with heavy figures and volume-written faces sit on massive carved stools. The table is closely packed with a variety of utensils – gold and silver bowls, tall glasses and plates, reminiscent of the real products of Russian masters of the XVII century. A tree with thick foliage rises on the slope of a round hill,

Turning to the traditional plot and preserving the composition scheme, as well as old techniques in handing over the folds of clothing, the artist of the 17th century in the main reinterprets the image. Putting an emphasis on everyday moments, strengthening the material interpretation, he thereby gives the icon a secular character and at the same time deprives it of the spirituality and philosophical sounding that make up the essence of Rublev’s work. This is particularly evident in the interpretation of persons performed volumetrically, using chiaroscuro, small strokes, lying in shape. Light with a smooth blush, equally serene, they do not contain a tense inner life, devoid of poetic spirituality. Duality affects the very style of the icon, which connects different principles of perspective construction. The architectural background, apparently, is borrowed from the picture of Veronese “

A correct and clear perspective with a hint of transmission of light comes into discord with the image of the table shown in the traditional reverse perspective, and with the figures of the angel located in the icon outside of the real space. This attempt to combine the icon painting tradition with a new manner, coming from Western art, is one of the steps in the transition to a new painting, characteristic already for the next stage in the history of Russian art.