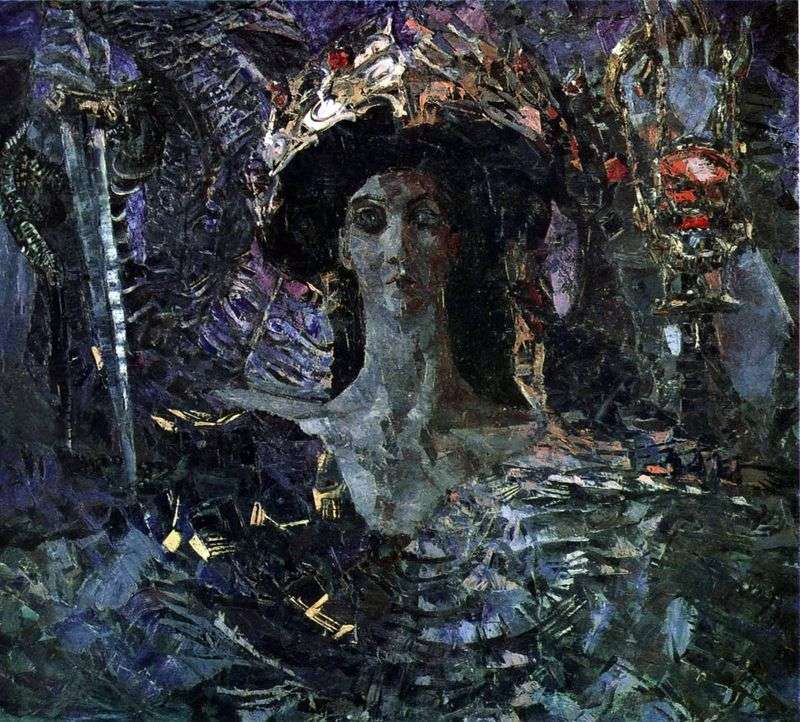 Mikhail Vrubel, who knew classical art and literature and spoke several languages, was open and easy to communicate. But for all that, a hypnotic force emanated from him, as if he had some secret knowledge that he did not consider possible to develop before his colleagues. Mysteriousness, laid by nature in nature Vrubel and manifested in his works, and to this day is a controversy among researchers of the artist’s work.

The painting “Six-Winged Seraphim”, usually underestimated by expression and painting, surpasses the Demon of the Defeated. In many respects, this is rather a restrained and many-valued finale of the artist’s entire journey in search of the Demons and Prophets.

In this work, the effect of a bright, shining stained-glass window and a dense, angular, mosaic brushstroke were combined amazingly. Seraphim is endowed with a hypnotic view of fate itself, and the sword and lamp in his hands are truly symbolic significance: steel exudes an icy cold, arguing with the pink, prophetic, fascinating and terrible light of the lamp.

Created in 1904 within the walls of the university clinic VP Serbsky, this work belongs to the highest manifestations of the creative spirit of Vrubel. The “fire-like” messenger of God, the angel with a fiery gaze, the patron saint of the prophet artist and his demanding judge, as if recalling the higher mission of the chosen one, calls for service – “to burn the hearts of people with a verb,” to awaken their souls “from the trivialities of the ordinary with majestic images.”

Unforgettable this inevitably looming face in a cloud of black hair, with bottomless eyes, this raised hand holding a sword. Retribution and the highest, harsh justice. And he wrote it with burning, dazzling colors, in the gleam of precious stones, but who would come up with the idea of “decorative” before this picture?

In the sublime structure of the painting, in its inherent “fervor” feelings, we can feel the reflection of Vrubel’s experiences of the time spent working on the canvas “The Demon Defeated.” Amazing beauty of color is perceived as a memory of the brilliance of the Byzantine mosaics of Venice and Ravenna, which the artist admired in the days of his youth. The work is written on top of the 1901 song “Easter Voices”.

In literature, the canvas is known by several names: “Angel with a sword and a censer”, “Azrael” and “Cherub”.