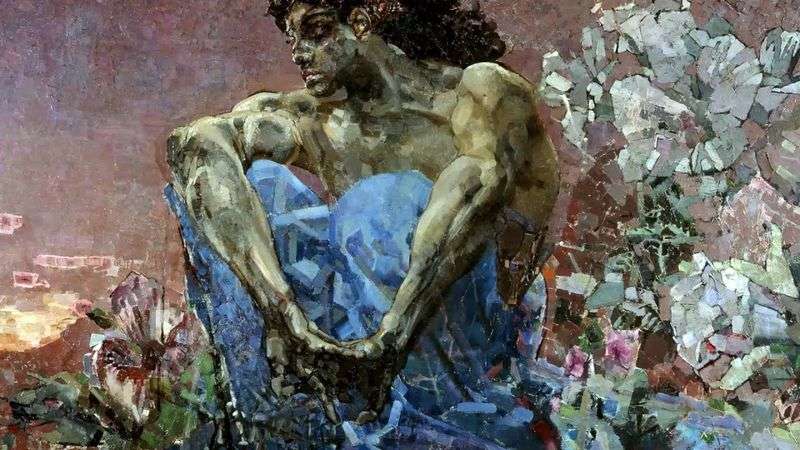 All the paintings of M. Vrubel were created in a mysterious and fabulous atmosphere. Especially his demons. In 1891, M. Vrubel painted 30 illustrations for the new anniversary edition of the works of the Russian poet M. Yu. Lermontov. Most of the illustrations are devoted to Lermontov’s poem “Demon.” The first sketch of a painting called “The Demon Seated” was painted in 1890, it is kept in the same place as the original – in the State Tretyakov Gallery. And the picture itself was written in Moscow in the house of S. Mamontov.

The plot of this picture was created by Vrubel after he read the “Demon” Lermontov. After he wrote this picture, the artist wrote these words about his work: “The demon is not so much an evil spirit as a suffering and sorrowful, but at the same time imperious and majestic.”

At all times, the demon represented the image of the strength of the spirit of man, his inner struggle and doubts. The picture of the demon represents a sitting sad demon, who tragically clasped his hands. His eyes are very sad, they look into the distance, they are surrounded by invisible flowers. The demon sits alone in the middle of the mountains, it is enveloped by a scarlet sunset. Looking at this picture, it is felt that the artist has caught one of his demons and planted in a frame.

The painting is written in an individual style characteristic for this artist, in which there are effects of crystal faces, so this picture is more like a panel or stained glass. Such an effect the artist was able to achieve due to the use of flat brush strokes with a palette knife.

“The Demon Seated” is the most famous of the Demons of Vrubel. In 1899, he painted the painting Demon Flying, in which he depicted Demon as the ruler of the world. And from 1901 to 1902 M. Vrubel was finishing his last work – “Demon defeated”, in which the Demon was on the verge of death.

Really, the demons depicted by the artist took the life of Vrubel himself? This is only an assumption, but having looked at these pictures carefully, you will understand that there are no mysterious them all over the world.