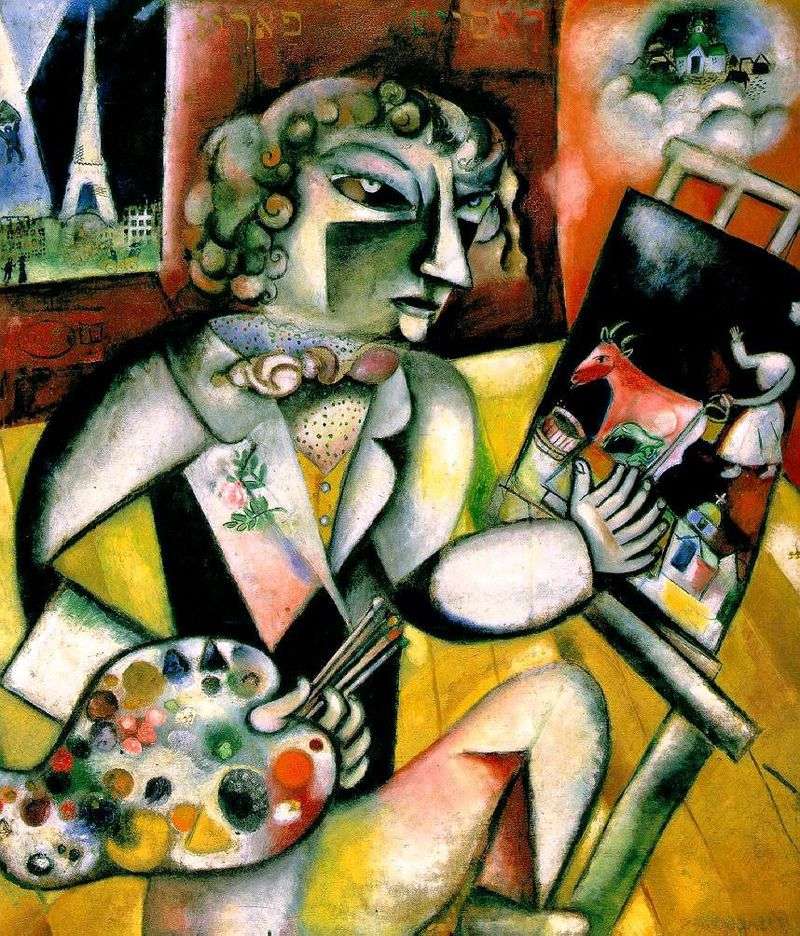 Chagall presents himself as a successful artist: well-groomed hair, an elegant suit, depicted in a cubo-futurist manner, a flower in a buttonhole and a fashionable tie.

Behind him in the window can be seen Paris and the Eiffel Tower glowing with lights. Before him on the easel “Russia, donkeys and others,” then considered his best picture, an unchanging memory of his native Vitebsk. He is working on a picture of “seven fingers” – an idiom in Yiddish, meaning “very fast.” Also 7 fingers can be correlated with the biblical 7 days of the creation of the world.

To the right of his head from the floating cloud is the vision of the Orthodox Church. For the first time in the work of Chagall there is a schematized landscape of Vitebsk, it is enclosed in a round frame, with a small green-headed temple in the center.

The inscription on the wall in the Hebrew language: on the left – “Paris”, on the right – “Russia”. This is at the same time the adherence to the collage technique of the Cubists, and the recognition of their isolation from the roots. The artist simultaneously expresses a feeling of homelessness, of irreverence and confirms his belonging to 3 cultures. Under the design of the top of the easel, the fragment of the “ladder” is masked, this is not a random symbol of the ascent from the level of external perception to the comprehension of the hidden meaning.

On the palette, which the artist holds in his hand, many colors – a symbol of success and prosperity. The lower part of the face of the depicted painter is likened, in the manner of the Cubists, to the rectangle of the painting. As M. Chagall’s husband W. Haggard correctly noted, “Mark schematically depicted the features of his face with a strange and beautiful pattern.”

The heterogeneous elements in the picture form some kind of psychic plans, where in musical consonance the obsessive visions, the fragments of life popping up in consciousness, unite in the mind, creating a figurative structure of fine metaphors.

This picture is associated with the world of the Russian icon: it is reminiscent of the static posture of the demiurge artist, his “speaking” attributes, the rhythm and flatness of the decorative and elegant image, the application of the reverse perspective.