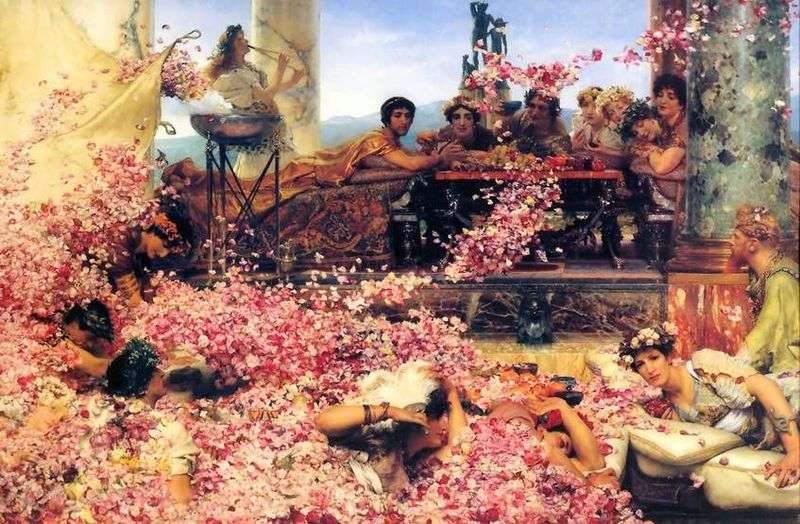 Heliogabal, or Elagabal – Roman emperor of the Sever dynasty from June 218 to March 222. The son of Julia Soemia, the grandson of Julia Mesa, the sister of Julia Domna, the wife of the emperor Septimius Severus. Soemia was married to Syriac Sextus Varya Marcellus, and Heliogabal wore first the name ‘Avita Varia Bassian’ ‘, and then took the name of Marcus Aurelius Antoninus, issued by the mother and grandmother for the illegitimate son of Emperor Antonin Caracalla. After the death of Caracalla, when the throne was joined by Macrin, Soemiah with his mother and sister, Julia Mamei, settled in Emesa. Here the son of Soemia was initiated into the main priests of the Phoenician sun god, Al-Gabala.

The handsome boy in the magnificent priestly attire was liked by the Syrian legions, and thanks to the gold and intrigues of the grandmother he was proclaimed by them emperor under the name of Caesar Marcus Aurelius Antoninus Augustus at the age of fourteen. After the victory over the commander of Macrina Julian, and then over Makrin himself, Heliogabal headed for Rome.

On the way to the capital, he showed his autocracy – the result of education in the spirit of oriental despotism: he did not expect the Senate decision, he accepted the titles Pius Felix Proconsul tribunicia potestate. The Senate with him was completely humiliated by the inclusion in its composition of the masses of Asians; magistracy became the property of actors, freedmen and servants.

The official Roman religion was dealt a severe blow by introducing the cult of the Syrian solar god, in honor of which the temple on the Palatine was built. Here, the most sacred objects for the Romans were collected: the palladium, the ancylia, the fire of Vesta, who now had to step back to the background before the depiction of the black stone that denoted the solar god. Here, the emperor, who called himself the sacerdos amplissimus dei invicti Solis Elagabali, daily performed divine service, in a Syrian suit, with his eyes and eyebrows, with whitened and bruised cheeks, in the presence of all the officials of Rome.

In conclusion, the emperor sang the sacred dance to the accompaniment of instruments and the singing of the choir of girls who accompanied the hymns with orgiastic gestures and a spinning around the altars. Not content with ordinary religious ceremonies, Heliogabal arranged a solemn wedding for his god with the goddess Tanita, brought from Carthage. The personal life of the emperor was a complete debauchery: he boasted that no corrupt woman had as many lovers as he. Nevertheless, the most terrible aspect of the rule of Heliogabal was the human sacrifice that was brought all over Italy.

Madness of the young emperor forced Mesa to take care of bringing the throne to the second grandson, Alexander Severus, the son of Mamei, who, by virtue of his Greco-Roman upbringing, as well as a high level of education, the exact opposite of Heliogabal. Julia Mesa achieved that Alexander was made Caesar and co-ruler. When Heliogabal tried to destroy his cousin, the soldiers rebelled against the emperor and killed him with his mother. The body of Heliogabal was thrown into the Tiber, forbidding anyone else to take the name Antoninus, which he dishonored.

A copy of this picture is suitable for interior in Empire style, Baroque, eclectic, classicism

The picture of Lawrence Alma-Tadema, illustrates a dubious story about the “Stories of Augustes” that during the feasts Heliogabal ordered to spread roses from the ceiling in such a quantity that the feast-drinkers were choking.