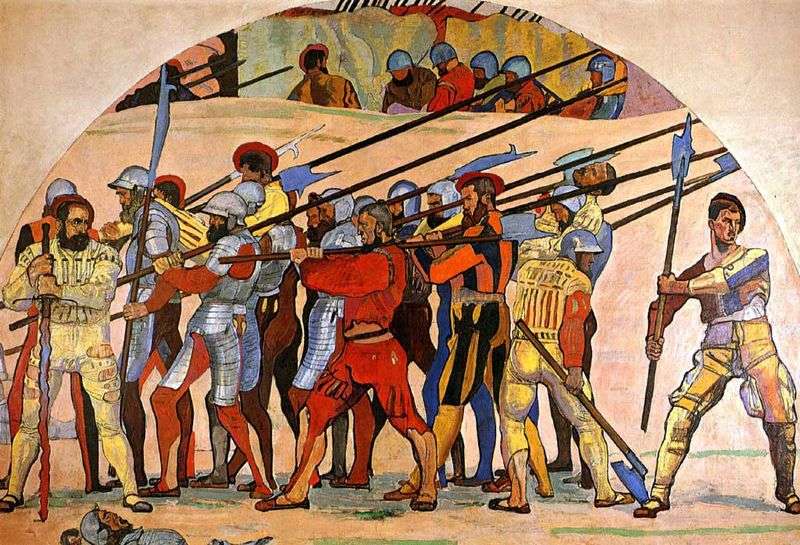 The Swiss artist-postmirezionist Ferdinand Hodler worked in the channel of the symbolist “modernist style”. He was one of the founders of the national romance and had a great influence on the formation of expressionism.

Hodler’s path to art was not easy. Heavy childhood, constant need, hard work and rejection of his work by the public did not break the artist, therefore all his mature works are filled with unbending will and courage.

Meeting with the Swiss painter Barthelemy MennoM predetermined the path of Hodler in art. Taking a talented boy to his studio, Menn instilled in him not only the skill of drawing, but also the general artistic culture, without limiting the originality and innovation of the revealing talent. The flourishing of the skill of the young painter fell on the middle period of Hodler’s life – the years of the transition of the epochs.

The manner of Hodler’s work in the first years of conscious creativity was an accurate and imaginative representation of realities, the acuity of the artist’s vision often passed beyond the present, becoming a kind of forerunner of the events of the future. The painful impression of his paintings is not accidental, since the main themes of his work are self-seeking, detachment, misunderstanding, fatigue; all this was reflected in his emphatically stylized canvases. Gradually, Hodler became famous and sought-after painter and even received prizes, but only the next stage of his work truly realized his human and picturesque potential.

The maturing Hodler changed the stylistics of painting a little – he had his own plastic style with elements of symbolism. The stylized monumentalism of his new works expresses universal themes, and therefore immediately evokes a response from the viewer. A few simplified and laconic images, filled at the same time with internal tension, are built on the paintings of the Swiss painter in compositional unity with the help of Hodler’s principle of “parallelism” of forms and pure colors.

The essence of this principle lies in the fact that in the frontal plane of the pictorial canvas, large, well-defined images that fill almost the entire space of the picture are assembled with carefully thought-out rhythm. The “visible embodiment of the idea” achieved at the same time was the task of the painter. His large symbolic paintings – “Truth”, “Love”, “Look into Infinity” – are executed in a manner that the artist himself called “parallelism”. It assumes a frontal, balanced arrangement of large figures; the elaborate rhythm of poses and movements inspires these figures, embracing them to the loftiness of the plan. Hodler’s monumentalism finds support not in the sphere of pure ideas, but in the images of national history.

The works of the mature Hodler are even more expressive, symbolic softness disappears in them. Thus, “Retreat under Marignano” characterizes the rhythm, irrepressible energy of people, united by a common goal. Each image is written out in a clear volume, strict contour lines, highlight the “screaming” movement of people. The general major composition of Hodler is now very far from the deep pessimism of the early works.

The canvas conveys a real historical event – the victory of the artillery of Francis I over the Swiss infantry, whose incomparable and unaccountable courage is expressed very clearly. The entire composition is divided by the artist into the upper and lower tiers, the first depicts the ranks marching along the snow-covered embankment and unified in full uniform soldiers, on the second the students rushing and jumping on their horses. The picture is solved by the language of modern gestures, the dynamics are represented by silhouettes opposing each other. It was this work that made Hodler famous throughout the world.

The last years of the artist’s life were overshadowed by his wife’s grave illness, so pain and a life drama fill the canvases of this period. However, despite the blows of fate, the main meaningful beginning of his life and work was the unshakable human will. It was not by chance that the motto was chosen: “What unites people, is stronger than what separates them.”

Modernizing all Swiss art, predetermining further ways of its development, Hodler has received more recognition in a foreign land than at home. So, in 1900 he was awarded a gold medal in Paris. Hodler develops national ideas of his creativity mainly in landscapes, the majestic and romantic tone of which is determined by the expressiveness of natural forms, the majesty of space, bright colors, the movement of life.

Hodler’s work was an indispensable stage in the restoration of the elusive relationships between spectators and artists. In his paintings, the need to obtain universal worldview impulses given by art reached the highest degree. It was at this time that Hodler was finally perceived and understood. The life and work of Hodler brought to Switzerland a grandiose scale in the scale of the embodiment of national and democratic ideas that have never been achieved.

The most famous works of Hodler: “Student”, “Apprentice”, “Night”, “Eurythmy”, “Speech of the Yiddish students of 1811”, “Reformation in Hanover”, “Kosets”, “Woodcutter”.