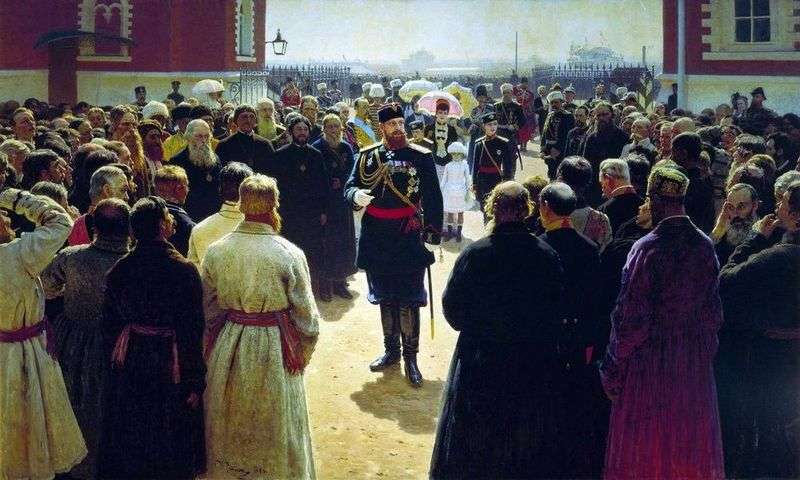 Emperor Alexander III is depicted with his family surrounded by courtiers and ministers soon after the coronation on May 5, 1883, at the moment of his speech to the volost foremen, representing all the provinces of Russia. In the background behind the emperor are depicted: Empress Maria Feodorovna and children – Tsarevich Nikolai, Georgy, Xenia, Mikhail, Olga.

The painting was commissioned by the Ministry of the Imperial Court, which was received by I. E. Repin in the summer of 1884 during his work on the canvas “Ivan the Terrible and his son Ivan on November 16, 1581.” The order was initiated by artist A. P. Bogolyubov. The main work took place in the summer of 1885 at Siverskaya, where numerous sketches were made in the open air, and at the Alexandria tsar’s dacha in Peterhof, where the artist wrote royal costumes for the picture, as well as in St. Petersburg.

In the cartouche on the frame is placed the text from the speech of the emperor: “I am very glad to see you again; thank you sincerely for your kind participation in the celebrations of Ours, to which all of Russia has warmly reacted. When you go home, pass on my thanks, follow the guidelines and the leadership of your leaders of the nobility and do not lie to the ridiculous and ridiculous rumors and talk about the redistribution of land, free prirzkah and the like.

These rumors are spread by our enemies. Any property, just like yours, must be inviolable. May God grant you happiness and health. “Placing the words of Alexander III on the frame provoked a negative reaction from Repin, which he wrote to V. V. Stasov:” … I don’t bear these signatures on the frames and in Vereshchagin, I was so tired. The words spoken in this speech are well known, and they were destined to make a very real turn in all of Russian life, which we cannot deny. These words are quite conservative… “. The custom-made frame is crowned with the coat of arms of the Russian Empire and decorated with the arms of the Russian provinces. Its symbolism is connected with the main halls of the Great Kremlin Palace for which the picture was intended.

The frame was made in St. Petersburg under the supervision of E. I. V. Kontory. The artist was not quite pleased with her. “The frame is something wrong,” he wrote to Stasov, “I had to draw the templates myself. Well, now you cannot redo it.” Having completed the work on the painting, Repin placed it on the exhibition “14th TPHV 1886”, which opened in St. Petersburg on March 2, although it was not included in the catalog. Already on March 9 in the “Weekly Review”, No. 115, column. 319, the first response to this work appeared. In June, the artist transferred the painting to the Peterhof Palace for inspection and reception by her royal family. Repin with irritation wrote to Stasov that “until June 25, the picture will stand there, and then it will be removed somewhere to Makar.” The picture was exhibited at the “15th TPHV 1887” exhibition in Moscow, after which it took its place in the Grand Kremlin Palace.