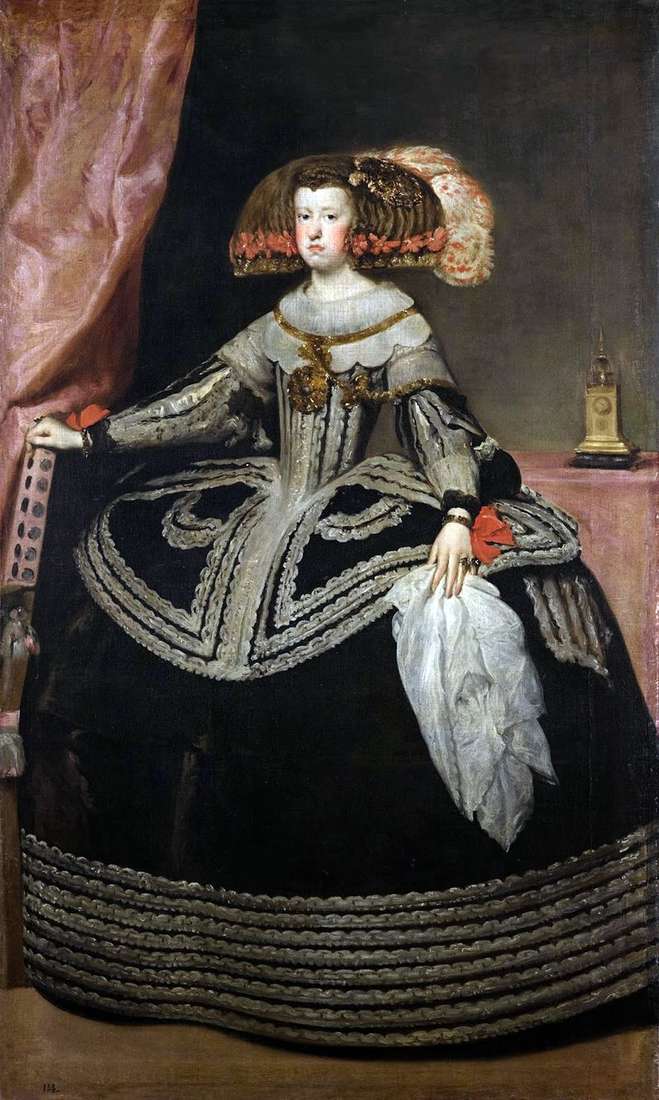 Painting of the Spanish painter Diego Velasquez “Queen Maria-Anna of Austria”. The size of the portrait is 231 x 131 cm, canvas, oil. The portrait depicts the second wife of the monarch Philip IV Queen Maria-Anna of Spain, Austrian Archduchess of the Austrian Habsburg dynasty, daughter of the Holy Roman Emperor Ferdinand III, mother of the King of Spain Carl II and Empress of the Holy Roman Empire Margarita Theresa.

At fifteen, Maria-Anne of Austria married her native uncle, the Spanish King Philip IV. From this marriage, six children were born, but only two of them reached adulthood – Margarita-Theresa

and heir to the throne of Charles II. After the death of King Philip IV in 1665, Maria Anna became regent for her young son, Charles II. Karl did not have heirs, since he was born as a result of incest, for many generations practiced in the dynasty of the Habsburgs. Karl, being an invalid, could speak and move with great difficulty, he was carried on his hands for up to 10 years, and, naturally, the regent was vital to him.

Maria-Anna remained regent for most of her life. By its very nature, a very cheerful young girl, Maria-Anna has become melancholic, morose and withdrawn over the years under the influence of strict Spanish court etiquette. Maria-Anna made numerous attempts to approve one of the Habsburgs as the heir to her childless son.

However, all the efforts of Maria-Anna ended in failure and after the death of Charles II, a war broke out for the Spanish heritage, and Maria-Anna retired to Toledo, where she became a nun. Maria-Anne of Austria died in 1696, she was buried in Madrid.