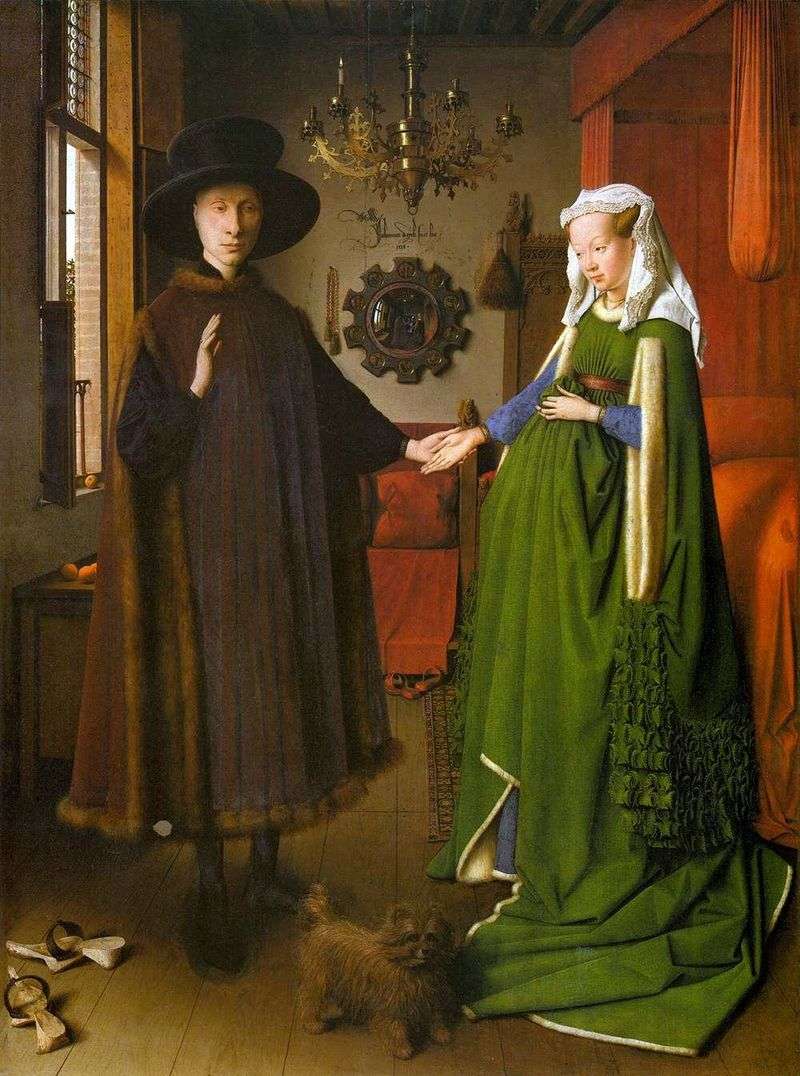 This pair portrait is recognized as one of the tops of all European culture. He is full of mysteries, provoking new interpretations and continuing to cause heated controversy. E. Panofsky, for example, claimed that the painting depicted a secret marriage. However, most researchers do not agree with him, agreeing on the fact that before us is the stage of betrothal. It is believed that the heroes of the paintings are Giovanni Arnolfini and Giovanna Chenami, Italians who lived in the 1430s in Bruges. The interior of a city house seems to be ordinary, but it literally breathes a mystery. The fact is that some objects allow us to treat ourselves as certain “mystical symbols.”

A lonely candle, for example, can be interpreted as the All-Seeing Eye. And there are a lot of such details in this work, that is, the field here is blessed for interpreters. Jan van Eyk for a long time was considered the inventor of oil painting. The final refutation of this fact, however, does not detract from his highest skill in this field. A detailed analysis of those parts of the “Portrait of Arnolfini’s Four”, depicting human figures or fabrics, confirms this skill of the artist, who was able to convey the finest shades of texture. Each brush stroke here is rubbed with a napkin or finger. In general, the fingerprints of van Eyck can be found everywhere where the light falling from the window “flashes” on the fabric of the dress. Note that this is how the green dress of the heroine of this work can not be written in another technique.

In the process of creating colors, the artist moved from dark tones to light ones. Beginning to write a dress, van Eyck, most likely used a mixture of malachite-green paint and lead white. It was the first layer. From above was laid a thin, almost transparent, layer of tone – with the use of a mixture of malachite paint with yellow. The glare patches of the Yari-Copper can be added by the painter later. Deep shadows, “hiding” in the folds of the dress, are written in several layers of a darker malachite tone. Multiple overlapping of layers leads to a thickening of the “common” layer of paint – on other parts of the picture it is thinner. This applies, for example, to the hands.

Body pink and brownish tones created by van Eyck without a preliminary basis and laid directly on the white primer, which was covered with a wooden panel. Jan van Eyck created the first in European painting a pair portrait. The successful Italian merchant Giovanni Arnolfini, represented on it, represented the interests of the Medici trading house in Bruges. In his image, everything that without which the “successful” person of that time could not have taken place – the sense of purpose, rigidity, ambition, arrogance, secrecy, strength of character. His young wife, Giovanna Jenami, on the other hand, shows her tenderness and submission. All these “intimate” characteristics, with tremendous psychologism reflected in the masterpiece presented by the artist, in their unity they make this work an extremely monumental and solemn and at the same time imbued with subtle lyricism. The theme of the work itself contributes to this – the oath of matrimonial fidelity.

According to some accounts, such a “domestic” betrothal performed with two witnesses was spread in the then Holland and was equated in significance with the church. The meaning of the scene is emphasized by a complex symbolic series. It is interpreted differently, but if it is more or less critical to take the “average arithmetic” of these interpretations, then it turns out: an orange indicates the joy of matrimony, – the shoes and the puppy-for adulthood, – the rosary for piety; Margaritas – for prosperous births / a candle burning in a chandelier – for “shining” the ceremony, for the presence of a divine spirit – “clean mirror” – for purity, etc.

This characteristic symbolism, coupled with the appropriate atmosphere, formed by the concentrated severity of gestures and poses, embodies the idea of the family as a “small church.” However, it is possible to argue with such an interpretation – this van Eyck picture is an unusually multilayered work in the semantic sense, and it is unlikely to reveal all its secrets to us one day. There are very curious interpretations of everyday, at first glance, objects that are saturated with the picture.