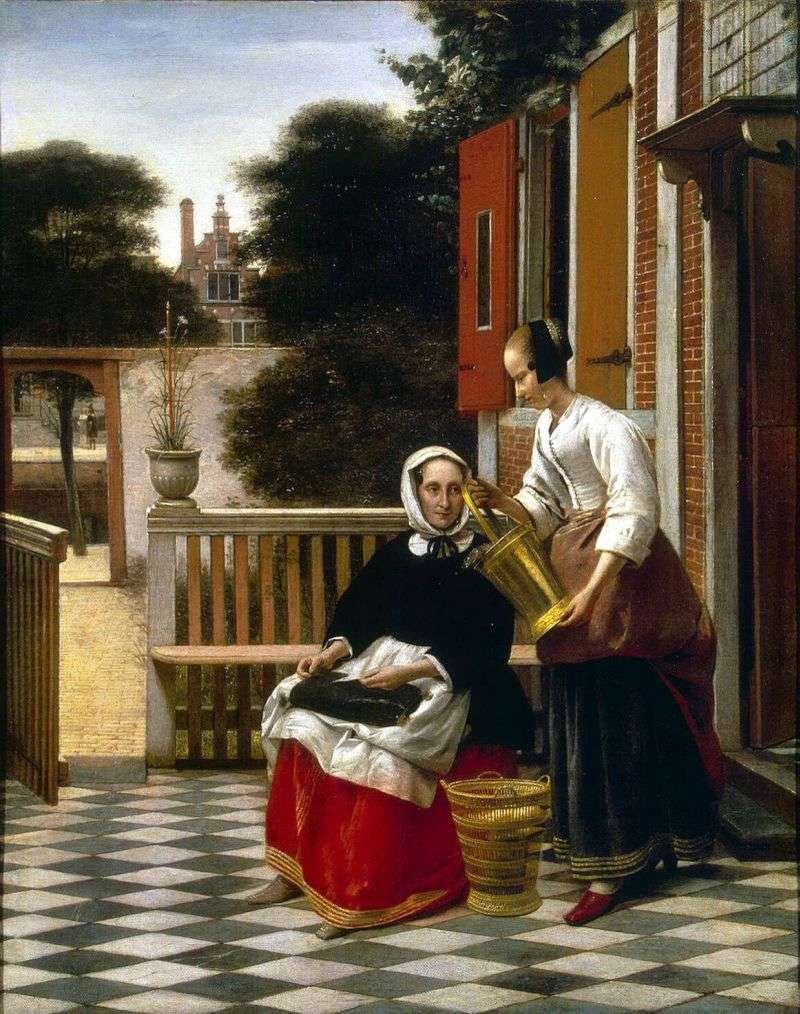 Peter De Hoch was a vivid representative of the Delft art school. Most often he turned to everyday subjects, scenes of everyday life of his contemporaries.

Coming from the very bottom of the Dutch society, in his early works the artist referred to rude genre scenes, often these were images of soldiers in stables or taverns. He studied with landscape painter Nicholas Berhem in Haarlem. In 1653 he entered the service valet to the merchant Justus Delagrange. Accompanying his master, he travels a lot, and in 1655 moved to Delft, where his employer firmly established. In 1655-63 he blossomed his art when he married, settled in Delft, was admitted to the local guild of St. Luke’s artists. During this period he writes family portraits, home interiors of wealthy families. Traditionally, a lot of attention was paid in Delft school to the exact transfer of space, lighting, color.

The picture “Mistress and maid in the courtyard”, created in the heyday of the work of Peter de Hoch, is rightfully considered one of his best works.

Genre scenes of everyday life shows a simple story: a young maid shows her owner a fish, bought in the market. The hostess, who had settled herself in a tiled courtyard, tore herself away from her needlework to look at the fish, whose head peeped out of the copper bucket, polished to a shine. All surrounding space shines with strict purity and order. The wicket from the courtyard opens into a small neat garden, an open arched opening, in turn, opens onto the embankment, a pair walks leisurely along the opposite side of the canal. A simple, but carefully written out to the smallest details sketch, permeated with an atmosphere of complacency, tranquility, blissful comfort, harmonious unity of man and the environment. Showing the usual chores around the house of two women, the artist at the same time fills her like a special meaning.

Although the figures are placed under the open sky, which is rarely found in the works of Peter de Hoch, however, bounded by the wall of the house, the fence and the gate, the interior of the paved courtyard, still creates a feeling of comfort. Closedness of space does not prevent the perception of the main idea of this small work, like many others, created by the master during this period – happiness from being in the quiet, cozy world of the Dutch burghers. Such a measured and unhurried way of life was typical for the city of Delft, where this picture was painted.

It is assumed that the model for the servant girl was the artist’s wife, Jeanette van der Burg, the daughter of a faience trader. After the death of his beloved wife de Hoh became depressed, his health was greatly shaken. The works of the late period are becoming increasingly grim and dry. The artist died in poverty, in a shelter for the mentally ill in Amsterdam.