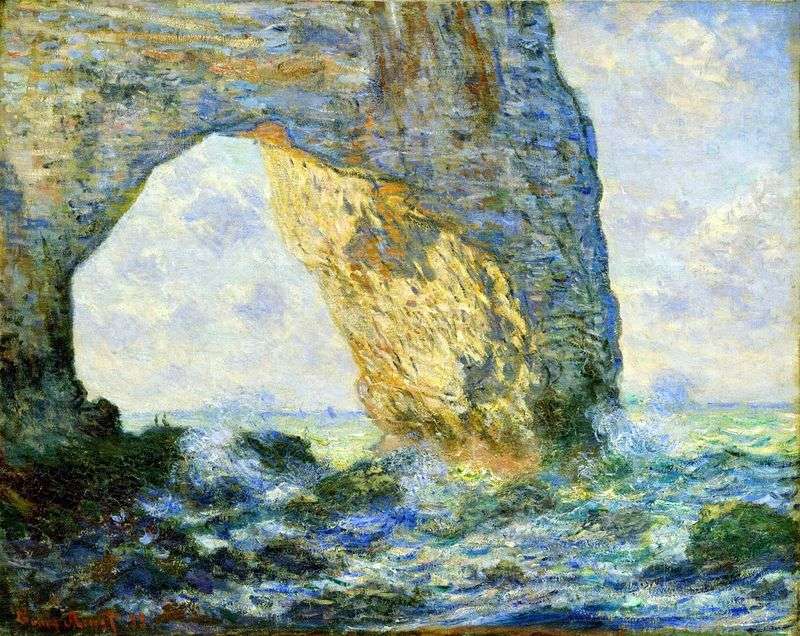 The chalk cliffs near Etretat on the Normandy coast have always been a center of attraction for artists. Monet often came here from 1883 to 1886 to draw inspiration.

In this magical place for a specified period, he wrote an incredible number of paintings – more than 60! Six of them feature the Mannport arch. In this picture, the angle is chosen in such a way that the dark top of the rock is cut off from above by the edge of the canvas and occupies two thirds of its length.

The surface of the rock is formed from brush strokes and vertical paint stains that perfectly convey all the irregularities of the stone and its chipped texture, as well as determine the rhythm and texture of the canvas. The color of sandstone reproduces well the mix of blue, pink and beige shades.

The general negligence and sweeping strokes on the canvas contrasts with the calligraphically written curls of waves that transmit energy and movement of a restless sea. The rock, the water and the sky are clearly distinguishable, although they are connected as a whole due to the expression of the strokes. The violence of the elements no less effectively reflects the light that has crept into the inner side of the arch. Nature appears before the beholder in all its might and magnificence.