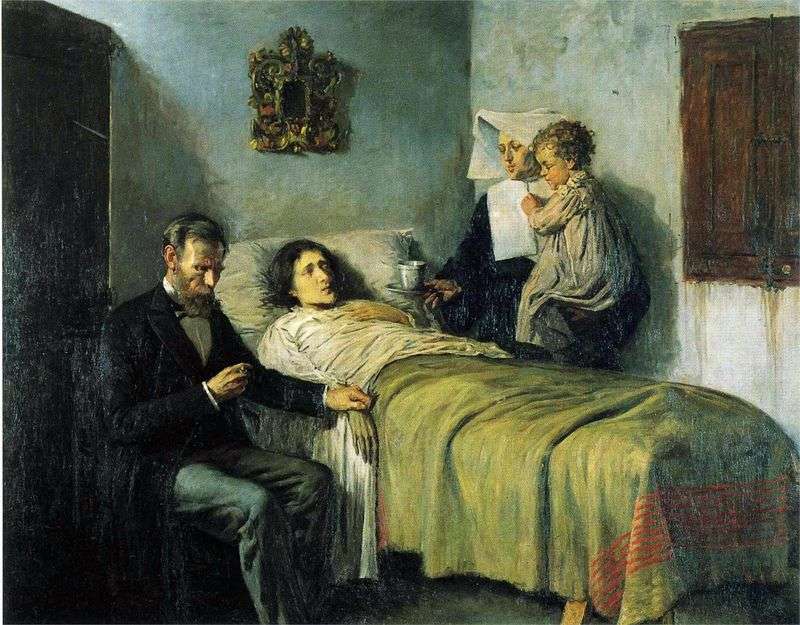 In 1897, Picasso, following the advice of his father, wrote a huge canvas – 197 centimeters high and 249.5 centimeters wide – in an academic manner. Without a doubt, it was out of respect for his father Picasso, who did not even understand it, discovered expressionism last summer, writing one of the best portraits in Spanish painting, the portrait of the devout and insane Aunt Pepa, is now becoming much more conservative.

“Knowledge and Mercy” is nothing more than an ordinary picture with a household plot, the composition of which, no doubt, was thought out by don José Ruiz Blasco,

besides its subject matter and composition testify to the influence of another picture – “At the bed of a sick mother” by Enrique Paternina.

We add that don Jose served as a model for the doctor in the picture of his son: he watches the dying pulse, while the nun gives her a small child. Palau-i-Fabre found out that don José took the child depicted in the picture for a few hours from the brisk beggar for a small fee, and the monk’s attire in one of the Barcelona monasteries, whose abbess was from Malaga and was friends with Aunt Pepa. But much more remarkable than the picture itself is its fate. She continues to admire people far from art who are wondering how a fifteen-year-old teenager could write such a perfect canvas.

Picasso presented a picture to his uncle Salvador along with all the preliminary sketches, and she was in Uncle Salvador’s house until his death, after which Lola Ruiz Picasso inherited the picture, eventually the canvas and all the sketches ended up at the Picasso Museum in Barcelona. From Carlos Rojas’s book The Magic and Mythical Picasso.