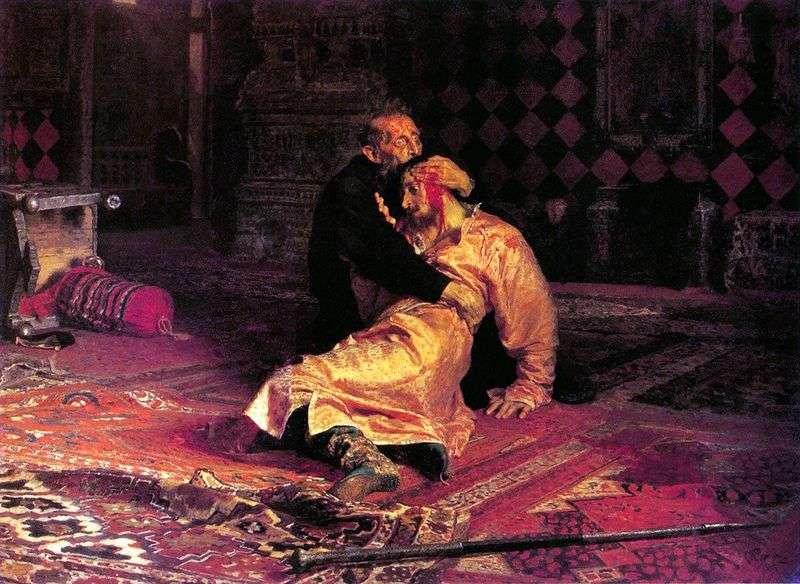 This is one of the examples of the artist’s reference to historical subjects, which caused him to associate with the events of modern Russian life. For the first time the idea to write a sad episode from the life of Ivan IV the Terrible came to Repin in 1882 after the concert of Rimsky-Korsakov at the Moscow exhibition.

On the one hand, Repin wanted to create something similar to the music he heard because of the power of her tragedy. On the other hand, the picture was a direct response on March 1, 1881 – the murder of Emperor Alexander II. The artist himself was under the impression of this and wrote: “Some kind of bloody streak went through this year. The bloody event of March 1 excited everyone.”

An excellent portrait painter, in this picture Repin achieved the inaccessible height of psychological expressiveness. The faces of Tsar John IV and his son are notable for their emotionality, amazing vitality, ability to transmit momentary states. The tyrant’s face depicts the moment when a person awakens in him, when the shell of the beast has flown off him and he is in a fit of his father’s grief. On the face of his son is a half-smile of a man dying, who forgives his father and wants to ease the consciousness of his deed and guilt. The pose of the son is similar to the figure of Christ in El Greco’s painting “The Descent from the Cross.”

Painting a picture took a lot of strength from Repin. He walked the streets, looking for images, doing etudes. In the apartment 1 room was reserved for the “king’s apartment”. When Vera’s little daughter fell from a trapeze, and she began to bleed from the nose, the artist asked not to let her down immediately and watched, remembered the direction of the streams and the color.

The picture excited society. In the Tretyakov Gallery went to watch her only massively. In the hall where it was exhibited, a red carpet was laid, as if continuing to draw and introducing the viewer to the murder room, a prototype of a modern installation. Meanwhile, at the Academy of Fine Arts she was criticized for errors against the laws of proportion and anatomy, and Emperor Alexander III decried for bare realism and the tendency of reproof. In the end, according to the royal decree, the picture was forbidden to be shown.

After a few months, she was again exposed, but her fate was tragic. On January 16, 1913, a young icon painter from the Old Believers Abram Balashov came to the gallery and struck the picture with 3 large cuts with a knife. Restoration of the painting was carried out successfully, but the original Repin letter was lost.