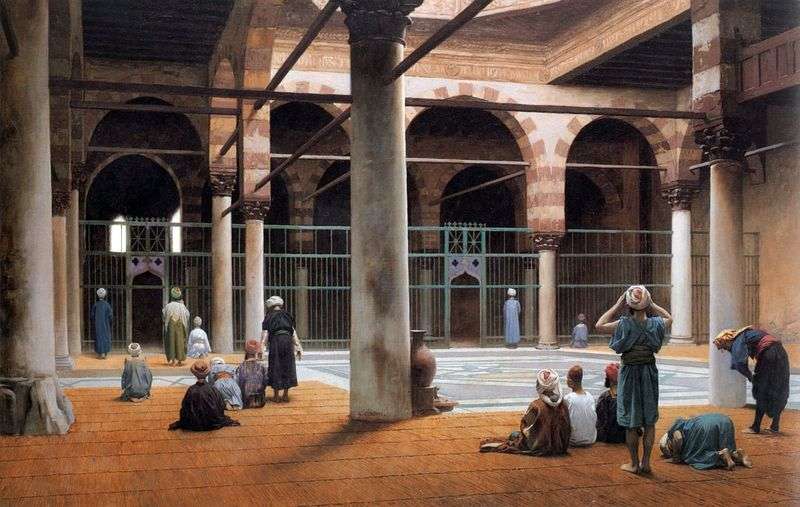 The Mosque is a Muslim liturgical architectural structure. It is a detached building with a dome-gambiz, sometimes a mosque has an internal courtyard.

By the wing to the mosque, minaret towers are built with the number from one to nine. The prayer hall is devoid of images, but on the walls can be inscribed lines from the Koran in Arabic. The wall facing Mecca is marked by an empty niche, the mihrab in which the Imam prays.

To the right of the mihrab is the minbar chair, from which the preacher imam reads his sermons to believers during the Friday prayer. At mosques, as a rule, schools-madrassas. Already at the end of the 7th century a distinction was made, depending on the purpose and functions between: a quarter mosque – a mosque of daily fivefold prayer; the cathedral mosque of Juma – a mosque for the collective Friday prayer, performed by the whole community; the central mosque of the mosque; mosalla – a city-wide mosque, in the form of an open square.

The cathedral mosque is flourishing in the era of the Umayyads, when its architectural forms and the richness of decorative decoration were to demonstrate the greatness of the rulers and material prosperity, the prosperity of the Muslim community. Simultaneously, simple mosques acquire a wide variety of forms and often have regional significance, serve as a court sanctuary built into the palace of the ruler, serve as a place for daily individual prayer and funeral.

All Muslim religious buildings have one thing in common: they are oriented strictly to the Kaaba in Mecca. This direction on the Kaaba is called the Qibla. From it got its name and the back, facing the Kaaba, the wall of any prayer building in Islam, which is also called the Qibla.