Home ⇒ 🎨Cole Thomas ⇒ The ruins of the Coliseum by Thomas Cole 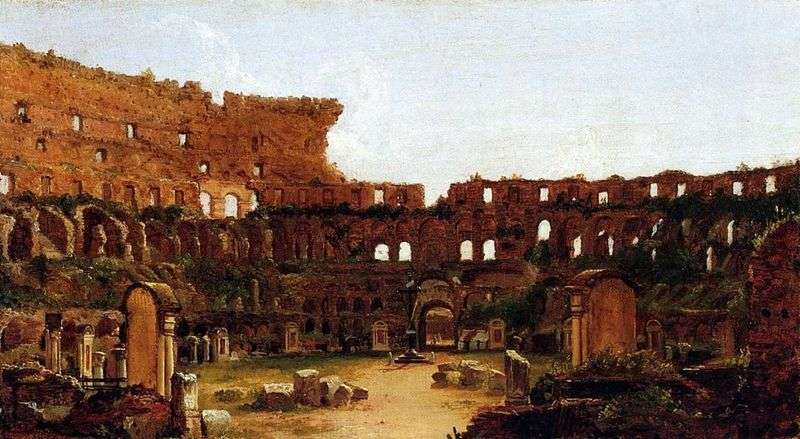 The Colosseum or the amphitheater of Flavia is an amphitheater, one of the largest arenas, a monument of architecture of Ancient Rome. Construction was carried out for 8 years, in 72 – 80 years as a collective construction of the emperors of the Flavian dynasty. It is located in Rome, in the hollow between Esquilino, Palatine and Tselievsky hills, in the place where the pond belonged to the Golden House of Nero.

The construction of the amphitheater was begun by Emperor Vespasian after his victories in Judea. The construction was completed in 1980 by the son of the latter – Emperor Titus. For a long time, the Colosseum was for residents of Rome and visitors the main place of entertainment, such as gladiator fights, bestial baiting, sea battles. Under the Emperor Makrin he suffered a great deal from the fire, but was restored by the decree of Alexander Severus.

In 248, Emperor Philip still celebrated in it with great ideas the millennium of the existence of Rome. Honorius in 405 banned gladiatorial battles as disagreeing with the spirit of Christianity, which after Constantine the Great became the dominant religion of the Roman Empire; nevertheless, animal persecution continued to occur in the Colosseum until the death of Theodoric the Great. After that, for the Flavian amphitheater, sad times came.