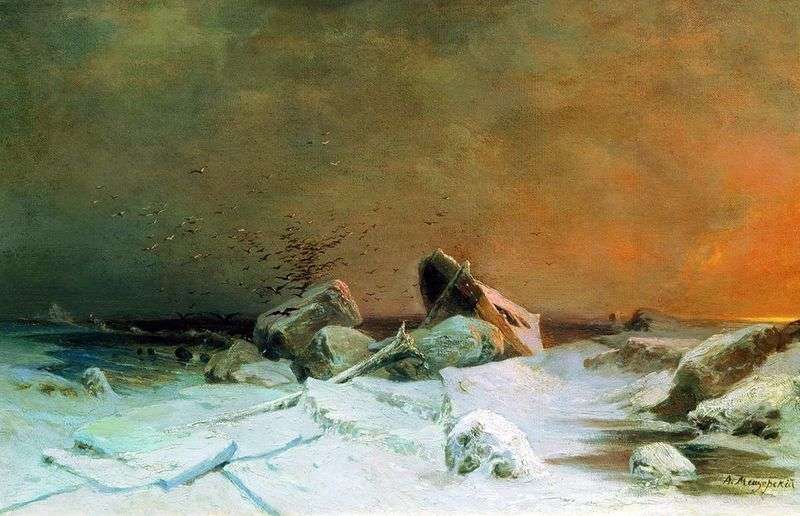 A. I. Meshchersky later began to master painting at the Academy, he worked a lot on his own and only half a century later he decided to master the rules of writing pictures. His work style was special, he was completely disagree with the teachers. The artist did not plan to be a portrait painter, his passion was landscapes.

The painting “Ice drift” was one of the first works that was acquired only by the newly opened museum of Emperor Alexander III. Of course, such an event brought fame to the artist and fame.

The picture “Ice drift” displays a winter theme so successful by the artist. The frozen land and the sea, which is slightly frozen off the coast, speak of a harsh winter. The bright glow of sunset signals the end of the day and the beginning of a long winter night. The artist so realistically conveyed the winter evening that there is a desire to warm up.

On the shore, frozen sea waves show the power of water, frightening and invincible. The sea is calm, in the foreground huge boulders are visible. A flock of seagulls looking for profit with hope, perhaps someone scared them off and they scattered from their usual places. The sky is covered with snow clouds, which, with the red glow of sunset, create an atmosphere of oppression.

Near the stones one can see a broken tree, which speaks of a sea storm. The coastline goes far beyond the horizon, and perhaps this is just the road to the lighthouse, in the distance you can see the silhouette of the tower.

Everything is covered with ice and creates feelings of the ice kingdom. Often at this time of year a large number of birds in the hope of tracking down their prey in the water. This is the most difficult period of wintering. In such weather conditions ice is necessary. Full freezing of the reservoir can even be dangerous. The artist realistically conveyed the atmosphere of a winter sunset by the sea. A. I. Meschersky managed to paint landscapes best of all, just as a landscape painter, he was very popular in St. Petersburg.