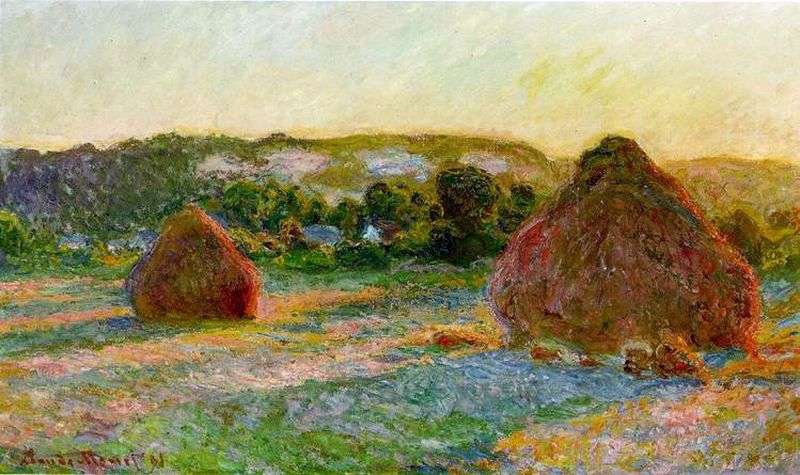 Thread stacks in the painting is not new; Monet to its already used Millet, Gauguin, Pissarro and Van Gogh – each in its own way. Monet introduces two innovative elements: thematic series and the way light vision. With systematically organized series we are able to consider one and the same tune when changing depending on the time of day lighting.

Monet wants to show his paintings in the course of time. He writes: “I’ve been working on a new series, but this time of year the sun sets quickly that I do not have time for it. This leads me to despair, but each time I am convinced of the need and justification for their suffering.

I can find what I am looking for: fleeting volatility light covering vegetation everywhere. “

In 1888, Monet makes sketches stacks near Giverny. A year later he returned to this theme during the harvest season. On the attraction of several months of hard work, Claude. He draws a field illuminated by the latest highlights of the summer, the same fields – red-red in the fall, and even later – covered in snow. In some way he could devote only about 15 minutes a day ; he returns to it every day at the same time. Angry and nervous when he can not achieve the desired effect, even destroys the fabric.

Work on the “haystacks” is interrupted because of the case “Olympia”. In 1889, Monet imbued with the idea to buy out the picture of the widow Mans to give it to the Louvre. He declares the collection of money, which is the first to support Dr. Bell, in love with impressionism. Within a few months Monet devotes all his time and energy to promoting the “Olympia” case; he considers it his duty to the memory of Manet. two hundred thousand francs were collected, and in November 1890 “Olympia” was presented to the Luxembourg museum. In the Louvre painting only appeared in 1907.

We immersed in the case of Monet had little time for painting. In addition, the summer 1890 was overcast and rainy. Launched “Rick” has already came to an end in the studio. Monet adds memory orange, blue and purple and pink hues.

The exhibition at the Durand-Ruel fifteen paintings in this series is general admiration, despite the high price. A particular success enjoyed canvases painted at sunset.