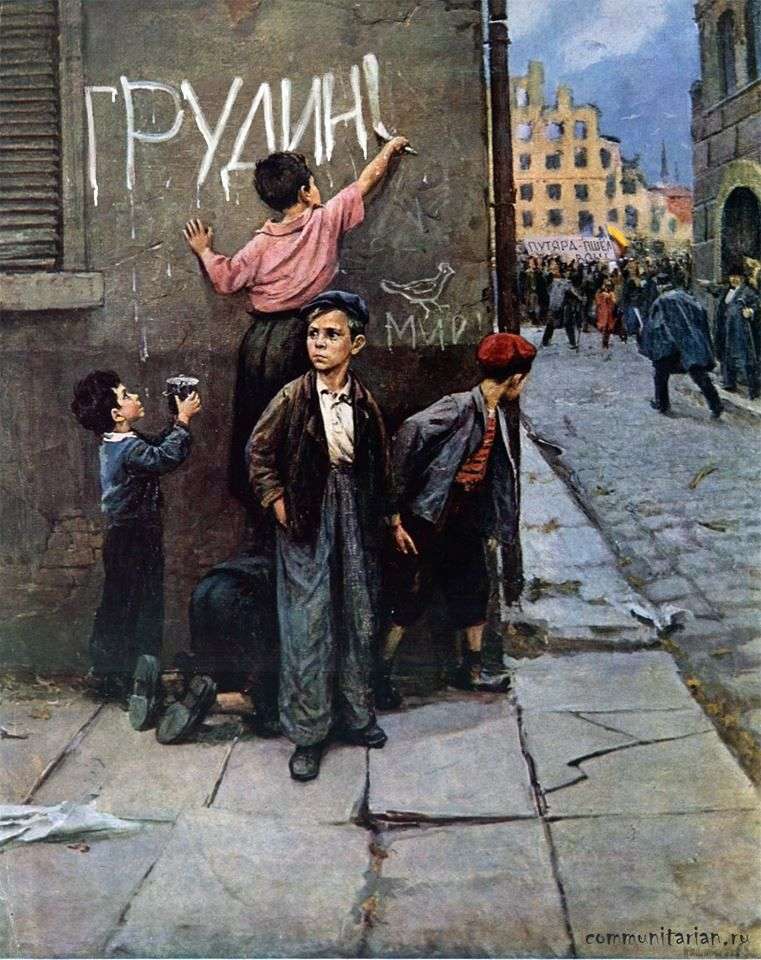 Such is the picture of F. P. Reshetnikov “For Peace!” This work is devoted to one of the most acute problems of our time – the struggle for peace. The writer, who took the story on the plot of the artist’s picture, would recreate the pages of the post-war strike of French dockers who refused to load weapons for a new war. He would tell that peace on earth is defended not only by adults, but also by children. And, perhaps, he would begin his story with the life story of little Etienne or Francois – the modern Gavrosch.

Many years have passed since little Gavrosh died on the Paris

In his ten or twelve years of life, he saw a lot of grief. Not the chagrin of the fact that a favorite toy broke or the wind took a kite, but an adult, great sorrow – war, need, heavy and irrevocable losses… And Francois became older than his ten or twelve years. He recognized the true value of war and peace and stood next to the adults under the banner of a dove flying. He knew very well now that the pigeon is not just a beautiful bird, the object of admiration of all the boys, it is a symbol of peace.

Therefore, his younger comrade painted a white dove on the wall of the house. And the other, a little older, climbing on the back of a friend, writes large letters “Pa1x!”. The kid holds a bucket – there is not sand for play in it, but paint for a slogan, for draft, for struggle. The youngest of this boyish company is very scary, but he is full of courage, this kid, and his gesture, with which he draws his bucket, is infinitely touching and expressive. Francois senior in this group. He has all the attention, all the tension.

Childishly serious and penetrating his eyes, tightly compressed little mouth. The whole figure is the personification of anxiety and tension. These guys are well aware that their occupation is not innocent childish pranks, but a serious political struggle, the help that they provide to their fathers and older brothers who came out for a demonstration.

The demonstrators are nearby, around the corner on the square, where the sky shines through the empty eye sockets of the huge building destroyed during the war. And in the gateway cowardly and angry gentlemen. “Rather, disperse, bludgeon them,” – they seem to shout to the police. Do not arrest the guys if the police find them here, the police will erase the slogans, but these boys will write them again and again until the world conquers…