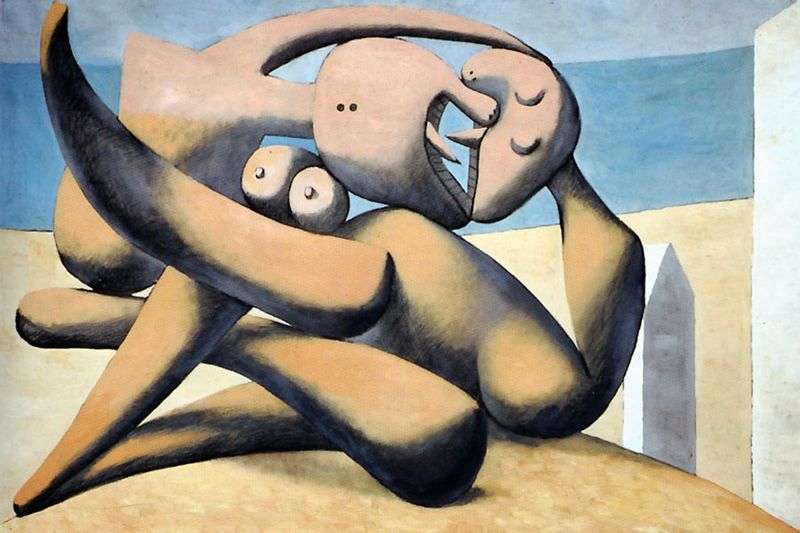 In 1925, Picasso seriously carried away by surrealism. Before that, he was close to the basic tenets of this direction – the liberation of mind from logical structures, the classical perspective, the desire for limitless naked consciousness and psychological automatism.

However, the output of Picasso’s surrealism turned out different than in its traditional presentation. In Picasso, he is plastic, emotional, harmonious, with a complex flavor.

The painting “Figures on the Beach” or “Kiss” – one of the most famous works written in the technique of surrealism.

As always, the artist portrays a woman in a distorted way, but in this work she acquires a predatory, threatening character. Having spread the female body into its component parts, transforming them into ideally smooth, sharp elements, the heroine on the canvas is presented as a kind of monster.

Emphasis in the work focuses on the faces of the characters – wide-open mouths, almost touching tongues stretching towards each other, sharp even teeth.

In the plot, you can guess the author’s hallucination, turning into an impulsive movement, up to screaming hysteria.

Biomorphic figures create an attractive atmosphere around them, which makes us consider elements of work for a very long time and mentally connect these “broken” pieces of two figures.

The picture is painted in bright colors – sunny yellow and rich blue, against which a brown-black color draws the main characters of the work.

The work has many interpretations: some see it as a reprimand for lust, others argue that it is the embodiment of passion, still others see in it the master’s personal attitude towards carnal pleasures.

Be that as it may, the painting “Figures on the Beach” became a very significant work, since it was the impetus for the creation of sculptures and, in general, the appeal of the great artist to plastic art forms. Picasso became interested in creating artifacts from wire, nails, children’s toys, pieces of furniture, cardboard.

Today, this unusual and bold work can be seen in the Pablo Picasso Museum in Paris.