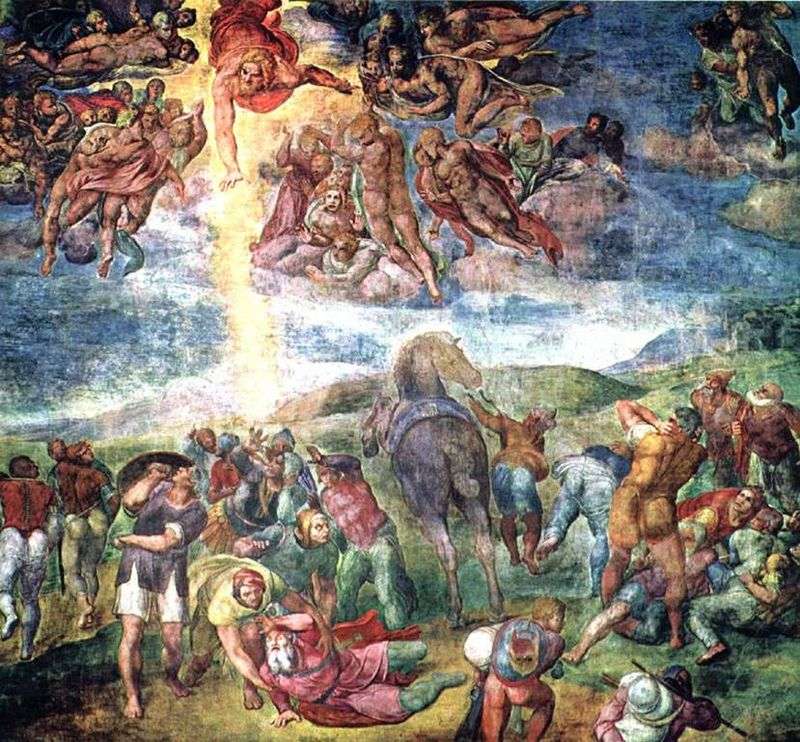 Here Michelangelo depicted the scene of the conversion of St. Paul. The New Testament tells how the Jew Saul, the persecutor of Christians, went in search of them, to bring them to Jerusalem and there to be punished.

For three days, Saul was blind and was healed by the word of God by his disciple, after which he was baptized and soon became the apostle Paul. Michelangelo depicted the moment when the Lord sheds a seed on His future follower, and he, blinded, falls from his horse to the ground.

The earth, as if seen by the artist from above, looks uplifted, besides its surface leans slightly to the left, and it seems that the main character continues to fall. But at the same time, a desperate gesture of a raised hand hints that Saul is ready to rise and go to a new life. The people around him are scared, someone is running away, someone is being covered with a shield from the blinding aurora, someone is holding back a horse rearing up, someone is rushing to a fallen. At the same time, everything here seemed to stop, as it happens when a bright flash of light snatches a picture out of the dark.

The combination of dynamics and static character introduces a special tension in the image. Some figures, such as those located below, are cut off by the edge of the fresco, and it seems that what is happening continues beyond its borders. In addition, Michelangelo enters into the composition a landscape as if seen from the sky, which gives the scene a cosmic scale.