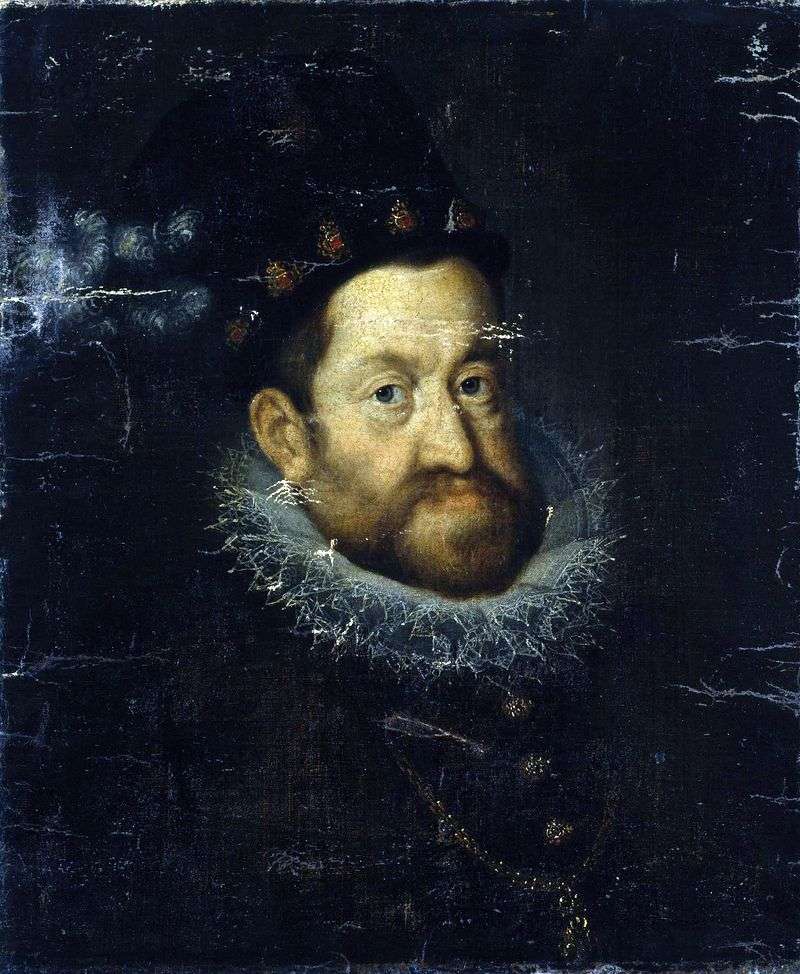 Painting of the German artist Hans von Aachen “Emperor Rudolph II”. The size of the picture is 79 x 66 cm, wood, oil. Rudolph II – the German Emperor of the Holy Roman Empire, the son and successor of Maximilian II, was raised at the court of Philip II and was not at all like his immediate predecessors; Catholics placed high hopes on him, since he took from Spain hatred of heresy and could be an obedient tool in the hands of the Jesuits. He had a sluggish, apathetic character, was extremely suspicious, prone to melancholy.

His semblance, cowardice and rudeness, along with sensuality and capricious despotism, deprived him of popularity and influence. Annoyed at his impotence, he was engaged only in astrology and alchemy. In Prague’s palace, where Rudolph II lived, he collected a huge collection of books, manuscripts, paintings, coins and all sorts of rarities. His favorites were corrupt people and fanatics.

Becoming emperor, Rudolph II for six years did not collect the Imperial Seim, but he had to convene it in 1582, due to the need to ask the empire for help against the Turks, as well as for religious disputes. Rudolph II began to eradicate Protestantism in Austria, the Czech Republic and Hungary. In Austria, almost all the nobility and all the cities professed Protestantism. With the accession to the throne of Rudolph II, a strong Catholic reaction began here, as well as the struggle of absolutism with the regional seims and self-government of cities. The reaction in Moravia was especially strong. The Protestant members of the Upper Austrian and Lower Austrian Landtags concluded an alliance for the defense of Protestantism; Catholics also formed a union.

In Hungary, the rule of the Austrians was very reluctant. Seeing the general discontent, Rudolf II thought to draw public opinion to his side by the war with the Turks. The general uprising continued, however, to be inevitable, and Rudolph II’s relatives found it necessary to take power from him in favor of his brother Matthias, who made enormous concessions to the Protestants. Under the treaty of 1608, Rudolf II gave Matthias to Hungary, the Archduke of Austria and Moravia and declared him his heir in Bohemia.

To retain the Czechs, Rudolph II was forced to sign on July 9, 1609, the Diet drafted by the Seym, known as the Diplomacy of Majesty. On the basis of this charter utravists and Czech brothers were equalized in rights with the Catholics. Czech Protestants received the right to build temples, establish schools, have their own synods and elect a committee of 24 defensors, 8 from each of the three classes of the Sejm. The committee was to lead the actions of the consistory, administer the affairs of the University of Prague, collect troops, collect taxes for its maintenance, and, if necessary, convene representatives of the Protestant population for meetings about the common cause.

Rudolph II devised means to take from Matthias the lands given to him, intrigued against him, but still had to renounce the Czech crown. May 23, 1611 Matthias was crowned, and Rudolf II was given a pension and retained his external honor. Deprived of power, exhausted by sickness and insanity, Rudolph II died on January 20, 1612, leaving no legitimate offspring, since he was not married.