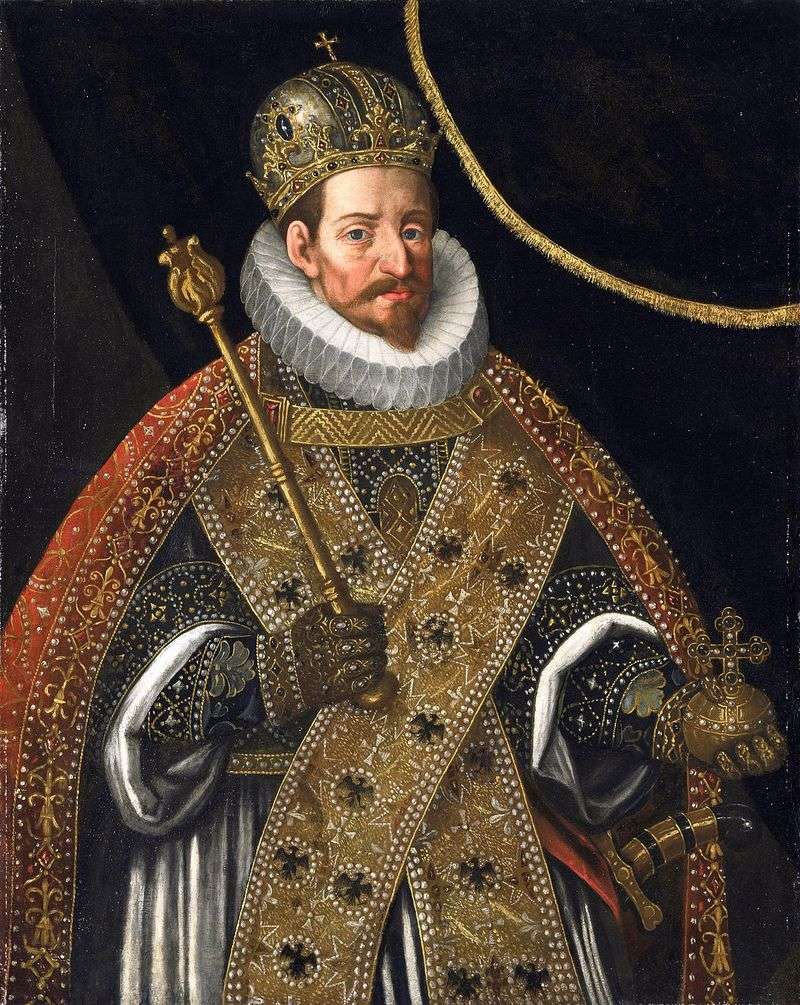 A painting by the German artist Hans von Aachen “Emperor Matthias.” The size of the picture is 150 x 105 cm, oil, copper. The emperor of the Holy Roman Empire of the German people was considered the vicegerent of God in secular affairs, just as the pope was the governor of God in the affairs of the spiritual.

The highest title of the Roman emperor in the first centuries of the German-Roman Empire was accepted by the German king only when he was crowned by the pope in Rome; Later, with the occurrence of strife between the popes and the German kings, the latter, together with the election to the German kings, became Emperors of the Holy Roman Empire. With the birth of new powerful monarchies, the title of the Holy Roman Emperor lost significance, finally lost its power and was eliminated in 1806. Matthias, the German Emperor, was born in 1557, was the third son of Emperor Maximilian II. His educator was a learned diplomat Busbek.

In 1593, the Emperor Rudolph appointed him viceroy in the Archduke of Austria. When the Emperor’s arbitrariness caused war with the outraged Hungarians and Turks, Matthias took upon himself the restoration of peace, when Rudolph disagreed with his decisions, Matthias, in alliance with Hungarian and Austrian state officials, forced him to give up power over Austria, Hungary and Moravia. To the state ranks, Matthias was forced to make some concessions in religious matters.

Soon Rudolph quarreled with the Czechs; the latter called Matthias, who took from his brother Bohemia, Silesia and Lusatia, and, on his death, was elected emperor. From external enemies he had to contend with the troubled Transylvanian prince Betlen-Gabor; Within the state, religious hostility grew more and more acute; the empire and hereditary possessions denied Matthias the means to wage war with Turkey, so he was forced to conclude in 1615 a world that was not favorable to him. The hostile attitude of the Protestants to Matthias increased when the childless Matthias, at the insistence of other members of his family, crowned the fanatic of Ferdinand of Styria, subsequently Emperor Ferdinand II, by the king of Bohemia and Hungary.

The attempts of the government to destroy the rights given to Protestants, and especially the “Majesty’s Letter”, granted by Rudolph II to the Czechs in 1609, aroused the displeasure, which in Bohemia passed, in May 1618, into an open uprising. Meanwhile, as the Czechs organized their own special management and resisted with weapons in their hands, while the inhabitants of Silesia and Moravia joined them, Ferdinand threw down the adviser of the emperor, Klesel, in Vienna, and wrested the reins from the sick and decrepit Matthias, who died soon after.