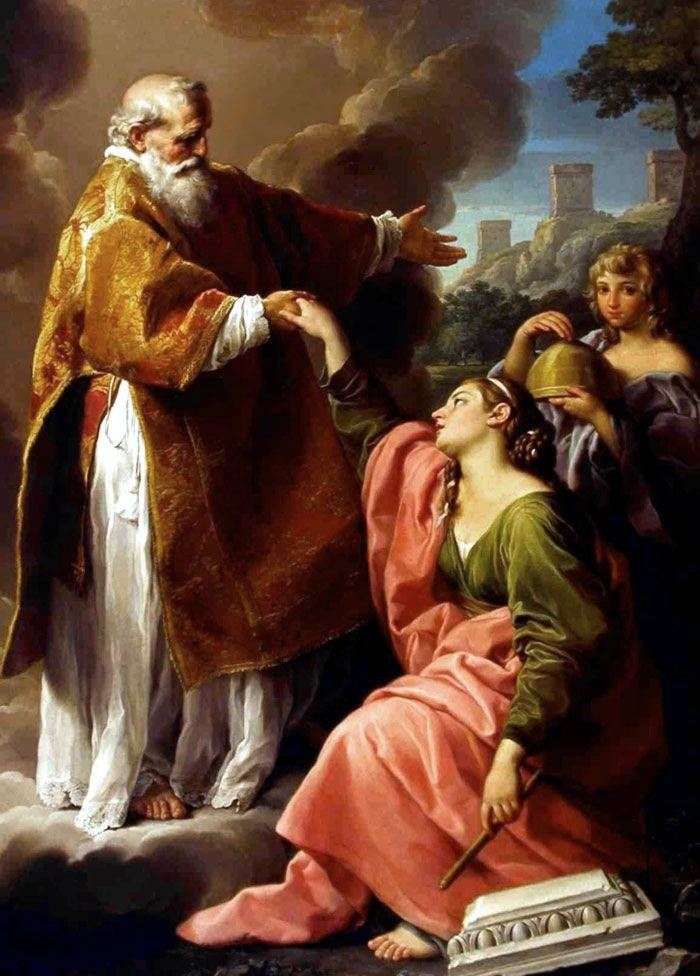 Painting of the Italian artist Pompeo Batoni “The triumph of the Republic of San Marino”. The size of the picture is 234x 160 cm, canvas, oil. San Marino is the republic, the smallest and oldest state in Europe, lying in Central Italy, between the Province of Forlì from the North and Pesaro-e-Urbino from the South. History. The foundation of San Marino is attributed to Saint Marinus, who fled from Dalmatia in the first half of the fourth century from religious persecution and worked as a stonemason in Rimini. Saint Marinus opened the quarries in the mountain of Titano, and then, seeking solitude, built himself a small cell on its top and retired from the world. The glory of his holy life attracted crowds of worshipers to him, and soon a small monastery was formed near his cell. This monastery, named for its founder,

During the following centuries, his name is mentioned several times in historical monuments; apparently, he kept political independence all the time. At the beginning of the second millennium, it was ruled by a people’s assembly, consisting of heads of families. In the thirteenth century, the power of the people’s congress was replaced by the authority of the elected General Council. From the 11th to the 13th century, the republic’s possessions were somewhat enlarged by buying small patches of land from neighbors. In the 13th century, San Marino, located between the possessions of the Counts of Montefeltro, the adherents of the Ghibellines, and the city of Rimini, standing for the Guelphs, was involved in the struggle between the two parties. San Marino concluded an alliance with the counts of Montefeltro, for which he was subjected to the curse of Pope Innocent IV. The popes made several attempts to take over San Marino, but without success.

The cause for further clashes was the right of asylum, which San Marino granted to all fugitives from the Church region. In 1739, two Sanmarinians, P. Lolli and M. Belzoppi, dissatisfied with the government, plotted to overthrow him and restore the power of the people’s assembly, but were arrested on time. The Papal Legate in Romagna, Cardinal Alberoni, in all probability, formerly with them in intercourse, demanded their release and submission to the spiritual court. The republic refused. Then Alberoni arrested all the Sanmarin patricians who were out of the homeland, closed the border of the republic for the import and export of goods, and moved with the army to San Marino, which, with the support of the clergy and part of the population, sympathized with the conspirators. The majority of the population were against him: he was sent to the cathedral to take the oath to the pope, it refused it;

However, Pope Clement XII did not approve of the cardinal’s behavior and restored the republic, which found strong intercessors under his throne. The Museum of San Marino, founded by the famous Italian archaeologist Bartolomeo Borghese. Museum of Ancient Weapons, Pinakothek Museum of St. Francis. On the site of the unsaved ancient church of Pieve the Basilica of Saint Marinus – the Basilica del Santo in neoclassical style. Here are the relics of Saint Marinus. The palace of the government in the Neo-Gothic style. The facade of the palace is decorated with the arms of the castles of the Republic of San Marino. In the Capuchin monastery, in the place of the ancient chapel, the church of St. Quirin was erected. In the palace of Pergami Beluzzi is now the State Museum.