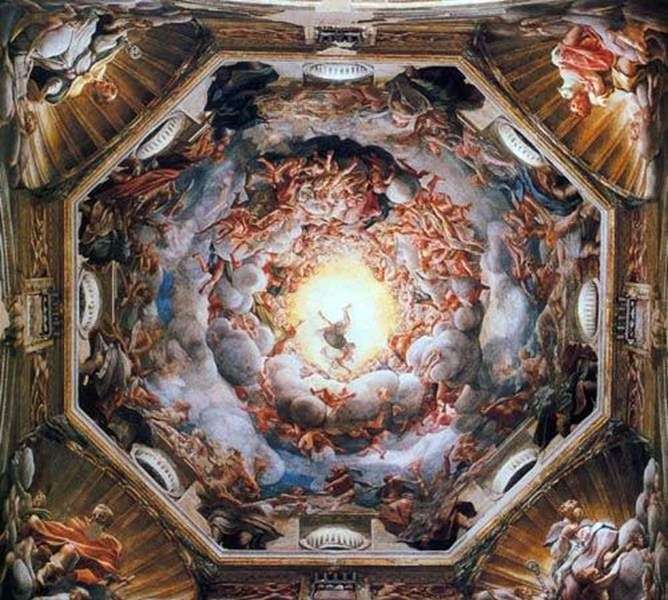 The fresco “Ascension of Our Lady”, decorating the dome of the Parma Cathedral, is one of the most significant works of Correggio. Here, his many years of searching in the field of perspective were embodied. The viewer, standing below, opens a dizzying spectacle.

The artist managed to destroy the closed boundaries of the architectural space and create the illusion of an infinite sky. The composition of the fresco, consisting of at least a hundred semi-nude figures, looks even somewhat congested, because of which the glance can not immediately find the main characters – the Mother of God and Christ. Note that in the abundance of figures, and in the cloudy, “vortex” background of the fresco, the Baroque features, the foreshadowing of the dome compositions of the 17th century, are guessed.

On four large “sails” supporting a drum of a dome, patrons of Parma are placed. So, it’s easy to find out John the Baptist among them – he holds a snow-white lamb in his arms. Above the four saints stands the “marble” octahedron, and even higher the clouds begin, on which the Virgin, hovering to the unearthly light, hovers. Near Her legs you can distinguish the figures of music-making and singing angels. To bow to Mary the ancient righteous rush. Among them: the forefather Adam with his mother Eve. It is easily recognizable and the Old Testament Judith, holding the severed head of Holofernes in his hands. In the center, in the highest and lightest point of the dome, is Jesus descending to meet His Mother.