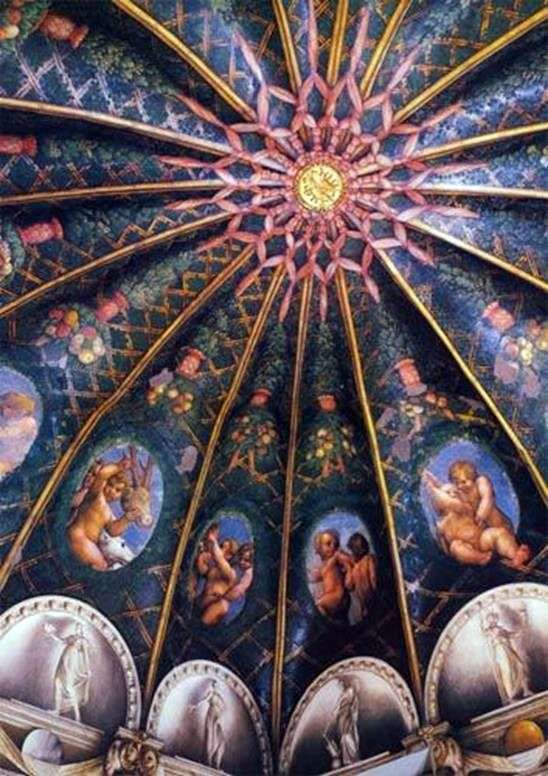 Returning in 1518 from Rome, Correggio received a very interesting order. The abbess of the convent of San Paolo in Parma asked him to paint some of the premises of the monastery. Being a woman of original and “free from prejudice”, the abbess wished to decorate her abode with mythological scenes.

Surprisingly, but the fact: among the frescoes performed by Correggio on her order, there is not one on the religious plot. Apparently, the master worked on these murals in 1519-20. They represent a link between previous works performed before the trip to Rome, and murals of the church of San Giovanni Evangelista, which the artist created in 1520-23. In them, Correggio, as it were, “worked out” his impressions of the works of Michelangelo seen in Rome. The entire cycle of frescoes of the monastery of San Paolo is associated with myths about the goddess Hunter Diana. Especially interesting is the ceiling of one of the halls – it is painted in the form of a green gazebo, in which oval “windows” are putti.

The paintings of the monastery of San Paolo – a true masterpiece of fresco painting. The gazebo performed with great taste and skill seems to the viewer, standing below, not drawn, but real. It should be noted that Correggio did not always resort to architectural elements when decorating rooms. And in the church of San Giovanni Evangelista, and in the Parma Cathedral, “false architecture” plays a secondary role. Creating here the illusion of “extended space”, the artist “goes” into the sky.

Especially skillfully modeled this illusion in the Parma Cathedral, where the clouds form a kind of spiral, rushing to the sky, to the unspeakable divine light. Working on the paintings of the monastery of San Paolo, Correggio pursued a different goal. This time, he was not looking for an outlet to infinity, but, on the contrary, he tried to create a feeling of cool canopy. And he succeeded brilliantly. Moreover, these murals, for all their intimacy, do not make the space close. Thanks to the “holes” in the dome, through which the “sky” is visible, the entire structure of the gazebo acquires lightness, airiness.

Separate attention deserves “statues”, depicted by the artist at the base of the arbor. At first glance, they seem like real marble statues. “To deceive” the viewer Correggio is helped by the brilliant mastery of the technique of a monochrome fresco and knowledge of the laws of perspective. Particularly important here are the deep shadows behind the statues: they visually deepen the niches and push the monochrome images of the figures to the front, giving them an extra volume.