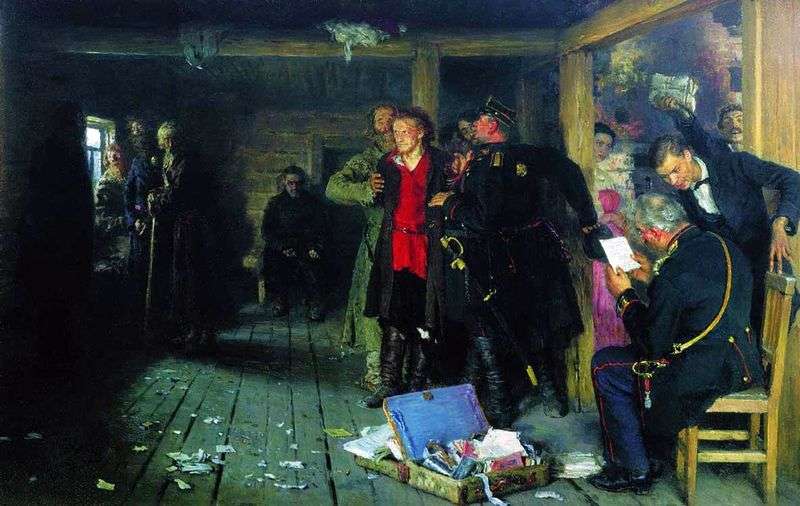 In 1880, Repin began writing The Arrest of the Propaganda. He worked on it for a long time, until 1892. Great effort cost the artist to work on a central way. Repin was looking for nature, collecting individual traits inherent in a particular model.

All the attention in the picture is focused on the revolutionary. He has just been captured. Hands twisted on the back. Near him are fussing Sots and conscript. The propagandist as if still trying to free himself. In his entire figure, the viewer feels the hidden energy, the will to fight. His angry gaze is directed toward the man standing at the window. The propagandist’s hair is disheveled, his shirt is unbuttoned.

The heroism of a revolutionary is especially acute when comparing his image with the image of a conscript standing next to him. He seemed afraid to approach the propagandist, to touch his hand. The entire figure of a contractor with his head thrown back, which warns against the movement of his hands, a dull face with a red swollen nose – all this makes his image almost grotesque. Other figures – the search officer, the bailiff, the clerk and the agent, the girl contemplating this spectacle, obviously sympathetic to the arrested, men standing at the window and looking at the revolutionary with caution, the man sitting on the bench – all these characters complement the main content with great tact, to the end reveal the plot, not arguing with the image of the main character. In the Arrest of the Propaganda, the event itself required the use of a detailed narrative.

Repin tried to make this story get pictorially-plastic embodiment. Having preserved the principle of building a household genre painting, which takes place in the interior, having carefully written out the necessary details, Repin singled out the compositional figure of a revolutionary: he placed it in the center of the canvas, giving room for his impetuous look and seeking out the internal movement. The artist collected the hottest colors in the figure of a propagandist. They are set off by the chill of the light flowing through the window. In The Arrest of the Propaganda, Repin creates an image that is typical of his other paintings on a revolutionary theme.

It emphasizes heroism, inner beauty, strength, the ability to go to the feat. But at the same time a tragic note sounds in this image: the picture reveals the loneliness of the revolutionary, his isolation from those to whom he gives his life. In the way that Repin interprets his chosen topic in this way, the special vigilance of the artist, who deeply understood the surrounding reality, his time, affects him.