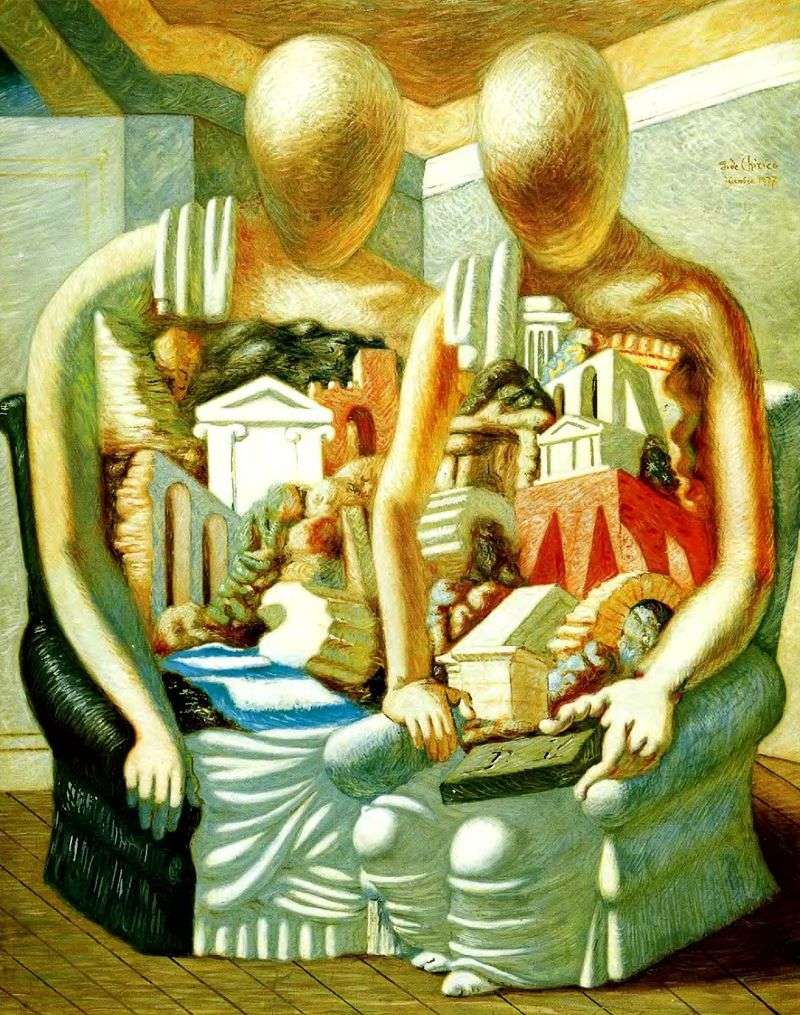 In 1927-1928 de Chirico repeatedly turned to the theme of archeology. Coinciding in time with the “gladiator” cycle, the cycle “archaeological” also appeals to theatricality and spectacular reflection of reality. Heroes – two sitting in the armchairs of a dummy.

Dressed in toga, they hold models of excavations and archaeological discoveries on their knees. The feet of both metaphorical archaeologists are carved out of marble, as are the architectural monuments on their knees. It seems that the figures, frozen in immobility, themselves gradually become antique statues. The artist depersonalized his heroes.

Instead of joyfully examining the discoveries, de Chirico chose to show the material results of the excavations… All the objects are in a closed space. The viewer’s view is first directed at the wall in the background, then it seems to be reflected from it and rests against two mannequins along with a collection of Greek and Roman archaeological finds. Contrasting colors – white and black – of two armchairs, a semicircular contour of hands of archaeologists lead to the center of the picture – a heap of ancient buildings.

The artist’s goal is to glorify these ancient ruins, which served as a source of his inspiration for many years. Andrea de Chirico repeatedly noted that Ancient Greece and archeology are the authentic elements necessary for the existential balance of his brother-artist.

In the “Archaeologist in the Temple” de Chirico emphasizes the architectural elements of the rooms. In the left part of the work you can again see a variety of measuring instruments – angles, rulers and compasses.

The main heroine of the picture froze in an elegant pose – the left hand rests on a reduced fragment of the ancient structure, and the faceless head melancholy leans towards it. It seems that the woman archaeologist idolizes her work, likens her sacred tinkering, and, being on the excavations, behaves as if she were in the temple. However, this temple for a real archeologist is a home of his own. Like archeology itself for the artist in love with her, Giorgio de Chirico…