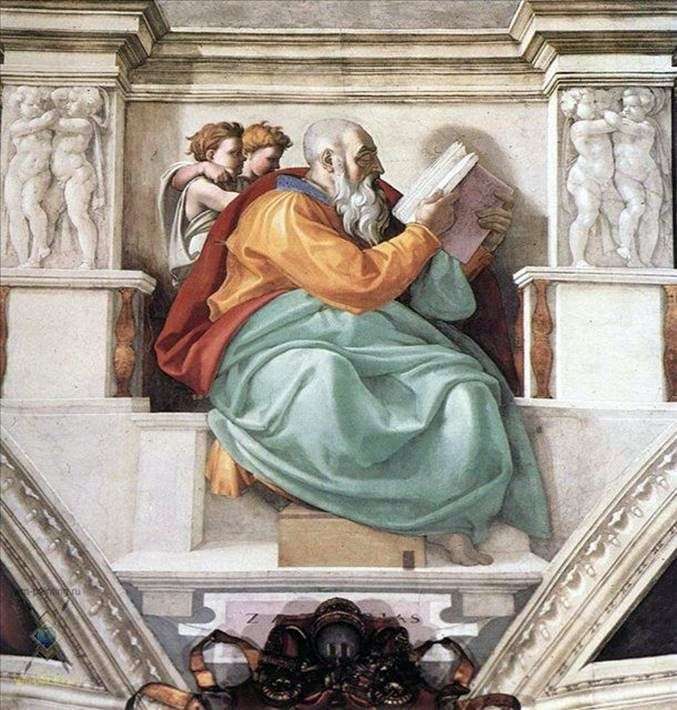 On the side walls of the chapel, images of the five prophets alternate with the same number of prophetess; thus, each prophet with his own pair is on the opposite side: the Delphic Sibyl and Joel, Isaiah and the Eritrean Sibyl, the Kumchan Sibyl and Ezekiel, Daniel and the Persian Sibyl, the Libyan Sibyl and Jeremiah. Such parallelism points to both the theme of universal atonement for the sins of Christ and the idea of the great harmony of the Revelation of John the Theologian, both in the Jewish world and in the pagan world.

Two other prophets: Zechariah and Jonah are depicted on the main axes of the Sistine Chapel. This arrangement is also of particular importance. Zacharias, painted above the door of the chapel, through which the Pope solemnly passed on Palm Sunday – a reminder of Christ’s Entry into Jerusalem and the beginning of the Palm Week – was considered the main prophet of the Passion of the Lord; and the prophet Jonah is located above the altar, he was considered the forerunner of the resurrection of Christ.