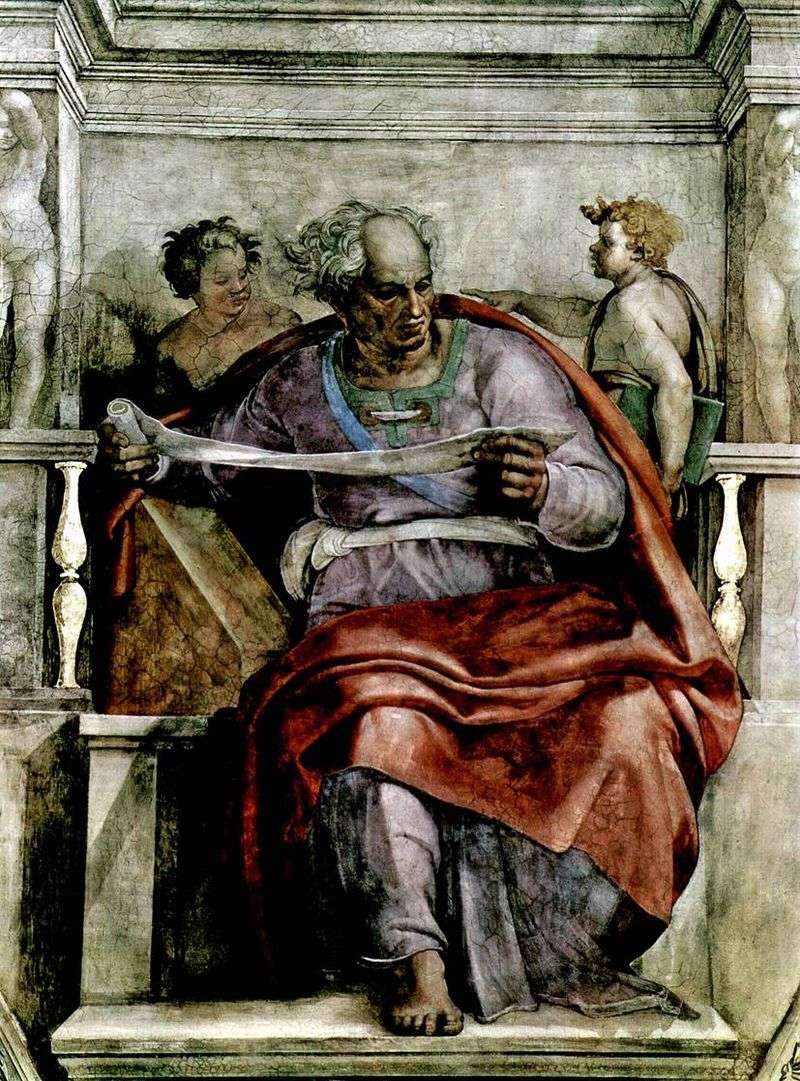 Fresco by Michelangelo Buonarroti depicting the prophet Joel. The painting of the ceiling of the Sistine Chapel of the Cathedral of St. Peter. Joel, son of Bethuel, an Old Testament biblical prophet. Born and lived in the 9th century BC. er in Judea, during the reign of the Judean kings Joash and Amaziah.

The life and activity of the prophet Joel is determined solely on the basis of the content of his book. But this content is not quite clear and does not contain any characteristic and quite accurate historical indications. Therefore, the question of the time of the life of the Prophet Joel and the origin of his book is quite controversial. Most of the researchers considered the prophet Joel a contemporary of Rehoboam, attributing his activities to the years of the rule of the Judean king Joash, namely to the years 868-838.

Joel – the first biblical prophet, according to legend, left behind a record of his sermons. In terms of the volume of the book of Joel, he is referred to as the so-called “minor prophets.” If we consider the book of Joel as a doped work, then the origin should be attributed to the first years of the reign of Joash, king of the Jews, that is, around the middle of the 9th century. The reference by the prophet Joel in the book about the attack of the Philistines most likely reflects the fact that the Philistines attacked Judea under Joram.

Consequently, the prophet wrote his book after this event, that is, after about 879. In a fairly prosperous period of the kingdom of Judah, the prophet Joel mainly called on his fellow citizens to sincerely believe in God and abandon the ostentatious service to the Lord. His book is presented as “the word of the Lord, which was to Joel the son of Bethuel.” Perhaps this and all that can be learned from the Bible about Joel himself. The main attention is paid to the prophetic news itself, and not to the compiler of the book. A close acquaintance of the prophet Joel with Jerusalem, his Temple and features of the temple service indicates that perhaps the prophet Joel wrote his book in Jerusalem or in Judea.