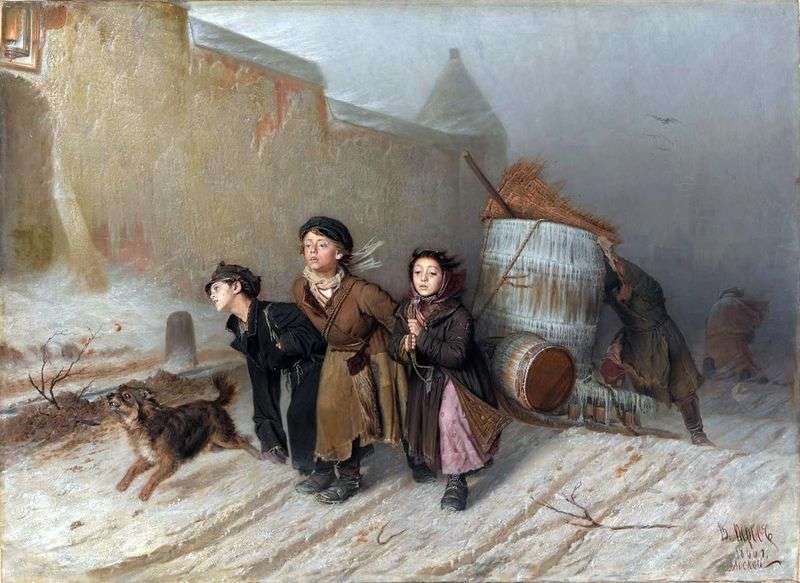 Vasily Perov’s picture “Troika” has a plot that is trivial for its time and a difficult writing history. The artist found it difficult to find models for the heroes of his picture: children who are forced to pull a huge barrel of water. The easiest thing was with the side characters – the models for them were found quickly, but for a long time he could not find a model for an average hero. There were practically no people willing to pose in the workshop.

Initially, Perov made many sketches, drew sketches, trying to find in the child’s face suffering and torment. The artist has already found a composition, built a top three, and the face of an average cab driver has not yet been. And just as he passed a crowd of poor children, he noticed a boy. Perov managed to find the parents of this child, they were simple peasants. Since there were many superstitions among the people about the painted people, the mother for a long time did not allow the artist to work with her son. But after all, still gave permission.

When the picture was completed, she was waiting for a huge success. All visitors to the exhibition were amazed at the hopelessness and misfortune of the fate of these children. After some time, the gallery workers noticed that the same visitor came to the picture every day and stood in front of her in tears.

It soon became clear that this is a woman – the mother of an “average cab driver,” who recently died of typhoid fever. The sad story of this woman gave Perov, who immediately decided to meet with her. At the meeting, the unhappy mother begged to sell her a picture, offering the last money. Of course, this was impossible, but Vasily Grigorievich to console the mother wrote a portrait of her son, which he presented to her.

The picture “Troika” still impresses with its expressiveness and emotionality. And according to numerous sketches and sketches, you can view the entire history of work on the canvas and trace the thoughts and views of the artist.